Dose of Truth Serum: How to REALLY Rate Hookups

I conceived a more honest hookup scale back in 2003. We were living in a Golden Age back then: Diddy was still Puff Daddy, the Razor was the coolest phone in the world, fat chicks were required to wear Hannibal Lector masks over their pudgy faces when appearing in public. A rip-roaring era indeed, my friends and I oft found ourselves at the local coed watering hole, under the subterfuge of fake I.D.s, trying to get our proverbial mack on. 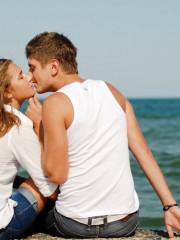 One night, we caught one of our friends “hollering” at a corpulent wench way below his normal standards, yet far above the weight capacity for most buses. We watched in horror as the specter of Bacchus incited our friend to serenade said fatso with a slurred rendition of “Shake Ya Tailfeather”; however, it seemed more appropriate he sing, “Flap Ya Whale-fin”.

But hey, I don’t judge. I don’t make superficial judgments based on who goes home with what at the end of the night. In fact, by my logic, for every dude hooking up with a fatty, that’s one less fatty hooking up with me. So my friend’s encounter with a creature of the bovine kind did not personally offend me – until “Tall Tale Sunday” rolled around. Like clockwork, we followed every drunken weekend with a day of retrospection as my friends and I gathered in the dining hall to recall in lucid detail the thrill of victory and the agony of going home alone to masturbate.

That Sunday, I waited with bated breath for my friend’s extra large account. But robbing us of cheap laughs at his expense, he claimed he’d hooked up with a “solid 8” the night prior. We all stared at him in disbelief. I offered counsel, assuring him all of us have waken up the morning after a sweet bender, under the impression we snatched something pretty, only to learn we hooked up with someone’s dad. But when it happens, we don’t prance around like he/she/it was a hot number. That’s not cool. No one’s ADD will sit through such fables…

No. The next morning with your buddies is “Show and Tell” and if you put on an embarrassing “show,” you’re required a truthful “tell.” When my friend indignantly insisted the girl he’d gotten busy with was “really an 8…maybe a 7.5 without makeup”, I forgave him for I realized he knows not what he does.

It wasn’t his fault he’s retarded – it was the system’s. Gauging hookups via a numerical classification is wack. The 1-10 scale fluctuates like the weight of a bulimic sumo wrestler and is about as reliable as a nymphomaniac girlfriend. There’s simply no quality control. One man’s “8” is another man’s “MY GOD!  WHAT THE HELL HAPPENED LAST NIGHT?!” which, for Michael Jackson (RIP), is a child under the age of 8.  Therefore, I implemented a candid five-fold assessment scale ranging from the compulsive lie (The Impossible Dream) down to the most embarrassing moment of your life (The Vietnam Flashback).

The world is broken into two groups: those that have never hooked up with anyone in this category, and those who have lied about it. This category encompasses the Helen of Troys, the babester babes, the crème de la femmes. The only civilians who snag these resplendent beings are those who do so with help from a wingman with the first name “Roof” and last name “fies”.

These are the girls who’ve been on your “To Do” list since the late ‘80s.  A lofty endeavor indeed, bringing one’s “A-Game” is a prerequisite. Not only must you clock in long man-hours of tedious conversation and feigned laughter but the selfless sacrifice of friends and wingmen are just as crucial as they divert potential “haters” and “cock blocks” from blowing up your spot. With a bit of luck and a lot of game (read: drinks for her), you may find yourself “standing” one sweet night.  Fittingly, the next day should find you with a megaphone broadcasting your glorious exploit to the immediate world.

Ouch. Maybe you were running selfless interference for a friend, and while he was busy groping someone higher on this scale you were sucking the face off something nasty. Still, as gross as aforesaid beast was, you can still look back with friends and laugh over it. When someone says, “Remember the manimal with the missing teeth you made out with?? Hahahahaha!!”  You will still be able to squeak out a meek “Ha.”

The hookup you never want to relive: No matter how much alcohol was consumed, no matter how forced or comatose you were at the time, there is no excuse for a ‘Nam Flashback.  Would you ever want to relive Charlie gutting your best bud right in front of your eyes?  Well, the same goes for a monster that falls into this category. The memory will haunt your nightmares and wake you in a cold sweat FOREVER.

In conclusion, don’t rob hecklers of potential laughs at your expense. If you find yourself on the wrong end of something hideous, be honest with yourself and admit it was a “blooper”. Like the chubby chick with the midriff tube top, don’t cover it up. When your buzz rubs off, and “Cinderella” turns into something that belongs in a cage at midnight, remember this article!

Dose of Truth Serum: How to REALLY Rate Hookups