How to Flirt in Your Text Messages

Most people will say that women have it easy when it comes to texting. That’s because men do the approaching, and women probably send 100 times more text messages than men which makes women better at communicating.

There’s where girls goof up: sending boring one-liners. For example, if a guy sends a message to a woman like, “Hey what up, did you go over to that party last night?” He can almost expect 50% of the time she is going to answer with a one-line answer that has no question attached to it. For example: “No I didn’t.” That kind of answer is considered boring and leads to nothing. Really, the cell phone should block those messages and return the message saying “put some life into your message.” The worst part is, most of these women are ruining their chances and they don’t even know it. Any quality guy will move on to more interesting conversations. Now, if a woman had a good response to that message it would look something like this: “Maybe. I didn’t want to make you jealous.”

You see, now the guy can respond and start building off what you’re saying, but most importantly, it’s FLIRTY!

As in real life, women and men differ when it comes to text messaging. So guess who does the approaching? Yes, men. Us men get the number and then we initiate the conversation. After years of coaching men on how to be successful with women, I have concluded that most men have no clue about how to text women.

What usually happens is that most men when they text women go into default mode and send messages to women like they are sending messages to friends. Men burn themselves by sending these normal, day-to-day conversation words like “how are you?”, “I am out of class, that teacher was boring.”, “What are you doing?” These messages are boring, they do nothing to women and your success with them goes down the drain. 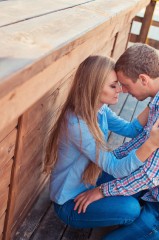 Key point for men: you need to send messages that make women feel something. For example: let’s change those last messages to something more flirty… “Hey honey”, “I was just in class and the teacher there reminded me of you, except she was cuter.”, “Hey we are heading to a party, you should come?”

You don’t get on a roller coaster because it’s boring, you get on it because you know you are going to feel something. A woman will text you and desire you if you can create that same roller coaster feeling.

Have you ever found yourself wondering what to text her? Or have you ever sent a text message that failed miserably? Well not anymore!

Go to: Texting Tipsto get over 101 proven text messages guaranteed to increase your success with women. You’ll be blown away by what these texting secrets can do for your dating life.

About tyler tray Tyler Tray has developed a highly successful program proven to increase a man's success with women through texting. To learn more visit Tips to Texting where you'll discover exactly what text messages women love to read. Go to: Tips to Texting to get over 101 proven text messages guaranteed to increase your success with women. You'll be blown away by what these texting secrets can do for your dating life.

How to Flirt in Your Text Messages