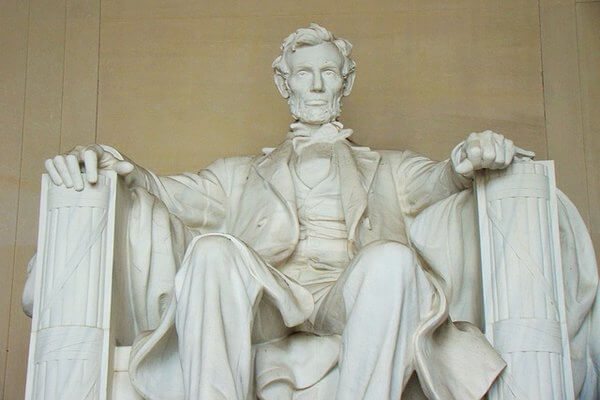 America’s sixteenth president has been associated with a great many myths and legends since his rise to national prominence in the 1850s. “Honest Abe” is the most well-known trope from that period. The expression is an allusion to Lincoln’s strong sense of justice and fair play and an indirect reference to his humble beginnings in the backwoods of Kentucky.

But although he grew up poor and was generally modest in bearing, Lincoln was no gentle lamb who stumbled into politics. From his youth onwards, he hungered for power, strived for immortality, and remained unswervingly determined to earn recognition as a politician and statesman.

Abraham Lincoln is an exemplar of the self-made man; and his story is a perfect case study in how confidence can drive such a man to do great things.

Lincoln is one of the most quoted of all presidents. The poetic genius of his Civil War speeches were the result of the many years he spent in intense reading and study. Lincoln never received a proper education, but as a young man he took a great interest in books and learning. After a long day of physical labor, he would stay up well into the night reading any book he could get his hands on (books were scarce in the rural areas of the time).

He read everything from Euclid to the King James Bible. He memorized and re-told stories that he heard from the many passersby he encountered in the dirt farm community in which he grew up. His love and mastery of language and reason gave him the confidence to believe he could raise himself up from his impoverished circumstances and become an eminent man of his age.

Lesson 1:   A determination to learn, improve, and cultivate your mind will give you the confidence you need to master your subject-matter, regardless of educational, economic, and social circumstances.

Lincoln served one term in the U.S. House of Representatives. When he finished in 1849 and returned to Springfield, Illinois, he thought his career in politics was over; for he had not been a particularly good congressman in either the state or the federal legislature in which he served.

The highly contentious Kansas-Nebraska Act of 1854 catapulted Lincoln back into the forefront of Illinois politics. Indeed, his feverish work against the extension of slavery made him a national figure. He gave speeches, worked to get political friends elected, and became one of the most formidable candidates in the newly formed Republican Party. Lincoln drew in and enthralled large crowds wherever he went. Nearly overnight he went from being an obscure country lawyer to one of the brightest stars in the anti-slavery movement. Confidence—that was the main cause of his sudden stardom

Lesson 2:  It can take time and an insuperable number of setbacks before you are in a position to achieve something great. Never lose hope, never give up on your ambition; and always be ready to take full advantage of the moment when things turn your way.

After Lincoln’s victory in the 1860 election, several southern states seceded. The Confederate attack on Fort Sumter in April 1861 plunged the nation into four years of civil war. Lincoln’s sole aim at the beginning of the war was to put down insurrection and restore the southern states to their lawful place under the Constitution. As the war dragged on, radicals in his own party and his life-long belief in the immorality of slavery pressed him into making emancipation an additional aim of the war.

The politics of the time in both the North and South are too complex to get into here. It must suffice to say that Lincoln attempted a number of half-measures to rid the country of slavery before finally getting the Thirteenth Amendment passed. Once he decided to destroy slavery as an institution, he got on with the task with a steadiness and calm that proved invaluable. Rarely did he falter in nerve or determination in seeing the thing through. He formed coalitions, tested ideas, gave reign to generals in the field to experiment with various emancipatory schemes, and, ultimately, cajoled Congress into passing a constitutional amendment that would forever ban the “peculiar institution” in the United States.

Lesson 3: There are many ways to attain your goal. Be confident that your ideas are right and steady enough to test them against hard facts. Only by doing the latter can your ideas become a workable plan of action.