One of our reader’s Puppet Master actually sent this article to me a couple of days before I wrote yesterday’s The Takeaway article.

I hadn’t read his article yet, but the two of us must have had been on the same brain wave, because we both stumbled upon a similar tactic.

Having just read his great article, I thought I would publish Puppet Master’s article as sort of a companion piece to yesterday’s post.

I’ll be Write Back by Puppet Master 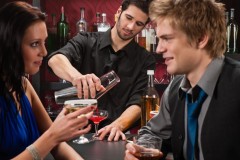 Ever been at a party where your talking to a girl and you run out of things to say? Things were going good but now you find yourself in an awkward silence, you can tell she’s bored, and eventually she leaves to go find her friends. Well this little routine is still being tested but so far I’ve used it about 10 times with success.

The routine is called “I’ll be right back!”. Pretty much it is a variation of push-pull, except you manipulate social norms in order to

Now when I say social norms, I’m referring to the assumption that the man is the one who is required to keep the conversation interesting. Although in theory it is our responsibility, my routine helps me convey confidence and relieves a little bit of the pressure.

Now this only works if the conversation is going “well” and if you are aware of your sticking points as far as conversation goes, but lets think first.

How often do you have a good thing going with a girl and she just says something that leaves you stuck? You try to think of a cocky funny response but by that time its too late. You two part ways and as soon as your out of sight of her, you think of the perfect response! Ive noticed this pattern with myself, but I have my own way of preventing the awkward silence… well maybe not preventing it, but you can act in a way that eliminates the need to blame your self for the interaction turning out poorly.

How do we men feel when we can tell a women is not interested in what were saying at the moment? We feel 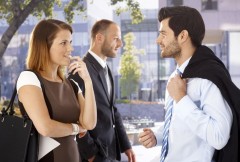 like its our fault that the women is not entertained, and it is, but we notice her boredom before the silence actually comes. So what I do is engage in her conversation and actually invest with her, sharing my input and opinions and what not, but after a few minutes, I start to show signs that im bored but im making it look as if im trying to stay interested.

When the conversation is going good and your playing your role of boredom, you wait till your turn to reply and immediately say ” Haha I’ll be right back” and you excuse yourself. But you want to take out your phone making sure she sees it and you head somewhere private like your going to make a call. While your away from her you have to come up with some reason you went to make the call, be creative, but no matter what you have to make sure u tell her it was a girl you were calling if she asks, which she will. If you come back and shes in the same area as when you left her, then your in the clear, just go back and start back up.

Now you might wonder why you would leave when things are going and I will explain in further detail later, but in a nutshell what your doing is breaking rapport and trying to get her to chase you, and if the interaction fails, you wont feel like an idiot, and here’s why. Shes gonna sense the fact that she was boring you, and she’ll assume that you left at the first chance to get away from her, ultimately being relieved when you return. My point is, if the conversation does go to shit, then when its your turn to talk you can just say “Well I’m gonna see what going on over there” and leave. When you leave she feels like she was to blame. She’s pissed that she invested so much time only to run you away. Its kind of like flipping the script and 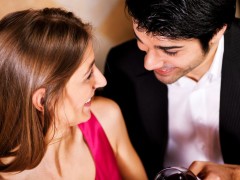 you are left without the shitty feeling.

Now that you know what to do when you fail, here’s what I do when it works.

Here are a couple ways in which the situation might turn out and some sample responses you can use:

Here, you come back to find out that she doesn’t ask where you went (wait a couple seconds before assuming this). This usually happens when enough rapport hasn’t been established. She might feel rude asking so simply handle it this way. Also, I forgot to mention, make sure you leave before she makes her point or is starting to switch subjects so you can jump right in where you left off.

Second scenario, you come back and she asks you were you went. Here is what i usually say, but feel free to improvise or make up your own response.

You: Ok I’m back.
Here: So where’d you go?
You: I told this girl I’d call her bout an hour ago because she asked if I was coming over tonight and i wanted to wait and see what was going on here first. I totally forgot till you and I started talking but you reminded me so much of her that I remembered and had to call her before she thought I was blowing her off, my bad.
Her: Oh no its fine.
You: Haha alright so where were we?

By doing that above, you can pick up where you left off( and hopefully you had a few ideas for conversation starters), you just showed a willingness to walk away, that you’re preselected, and you just showed your target that you weren’t gonna just blow off that girl completely to talk to her. Plus you threw in a minor neg, because girls don’t like to think that their image and personality isn’t solely their own. The goal isn’t to make the girls feel like crap, its just to help guys who tend to go nowhere with conversations, because having a women leave your company is pretty socially crippling. I hope this works for you guys like it has for me and I hope that you will share your experiences and opinions.