What Do You Want Me To Do? She asked with a far-away look in her eyes… 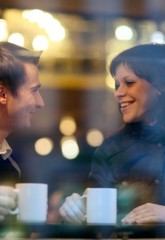 I’ll never forget when it “clicked” and I realized the greatest secrets of Seduction. It didn’t come to me through years of research. It came to me as a teenager.

The years of research, training and breakthroughs in Hypnosis, NLP, Huna, Martial Arts and Mental Warfare came later, and it was like adding Rocket Fuel!

I might sheepishly admit that when we lived in L.A. for a few years, as a teenager I “borrowed” my older brother’s ID to go nightclubbing.

I went to a concert of a popular 80’s group (who still tour today). I somehow finagled an after-show pass and the when the band came down to mingle with the crowd at the bar, I caught the eye of the guitaristâ€™s knockout girlfriend.

She was so beautiful and exciting, mysterious and surreal, I was spellbound. She also had an undeniable innocence and freshness while
at the same time clearly being world-wise and experienced…

…and yes, a hot blonde with big tits!

In this moment, not more than 3 seconds, I (perhaps I’d lost my caution to a few drinks) went directly up to her, looked her in the eye and said “you. are. epic.”

We just stood there and stared at each other with great smiles. Then the guitar player came up yelling and pushed me. He had a few security guards with him.

I said, in all innocence and truth, “But She WANTS to talk to me.” He looked at her. She just stood there. She knew it. He knew it. I knew it.

There was a great pregnant pause and I was clearly about to get my ass kicked when my brother came up and dragged me away saying “sorry, he’s just had a little too much.”

I suppose I should’ve thanked my brother, but instead I pleaded my logical case to him.

It met deaf ears as he had the wisdom and maturity to know that, although clearly the magic was there and she wanted me, there was also a guitar player and his bouncers more than willing to kick my ass on the spot.

A few hours later we’re walking out of an all-night restaurant and who should be walking in but the same girl (now looking unhappy) and the guitar player (not looking like a very happy person either).

They hadn’t seen me and when the guitar player went to the hostess I stepped up to her and said “come with me.”

She said “what do you want me to do…” with a far-away look in her eyes.

I said “I don’t know, but I know if you don’t come with me right now I’ll never have truly lived.”

Smiling like a cat, she took my hand and we walked out quickly to my brotherâ€™s car.

I was serenading her with pop songs all the way home to her and my brotherâ€™s laughter, and when we got home it was one of the most magical nights of my life.

Why am I telling you this?

Here’s the moral of the story.

I never saw her again after that day. I have a feeling the guitar player didn’t either LOL. To this day I wonder if I’ve ever seen a more beautiful woman. She was like a combination of Kim Basinger, Heather Locklear, Rose McGowan and Michelle Pfeiffer all at their peaks. It’s hard to describe such an intricate lusty beauty. It really is.

And in the afterglow of reflection that next day, it dawned upon me why such magic had happened:

One of the fundamental secrets of seduction is to be void self-consciousness.

I was not self-conscious, so I was free to flow. I did not have patterns, scripts, and phrases.

I simply had intuition and playful abandon.

Combine that with the “techniques” you discover from coaches on sites like TSB Magazine and you can literally become a Seduction Powerhouse and open up a world of dreams!

For me, it was only a beginning. Can you IMAGINE what happened when I learned NLP, Hypnosis and the Ninja Mind?

Yours for the Future
Scott Bolan

About Scott Bolan A pioneer in the fields of NLP, Persuasion & Influence, Hypnosis, Kahuna and Martial Arts Mastery, Scott Bolan distills it all down to instantly effective methods you can use to Dominate Life Like a Pitbull! Scott Bolan