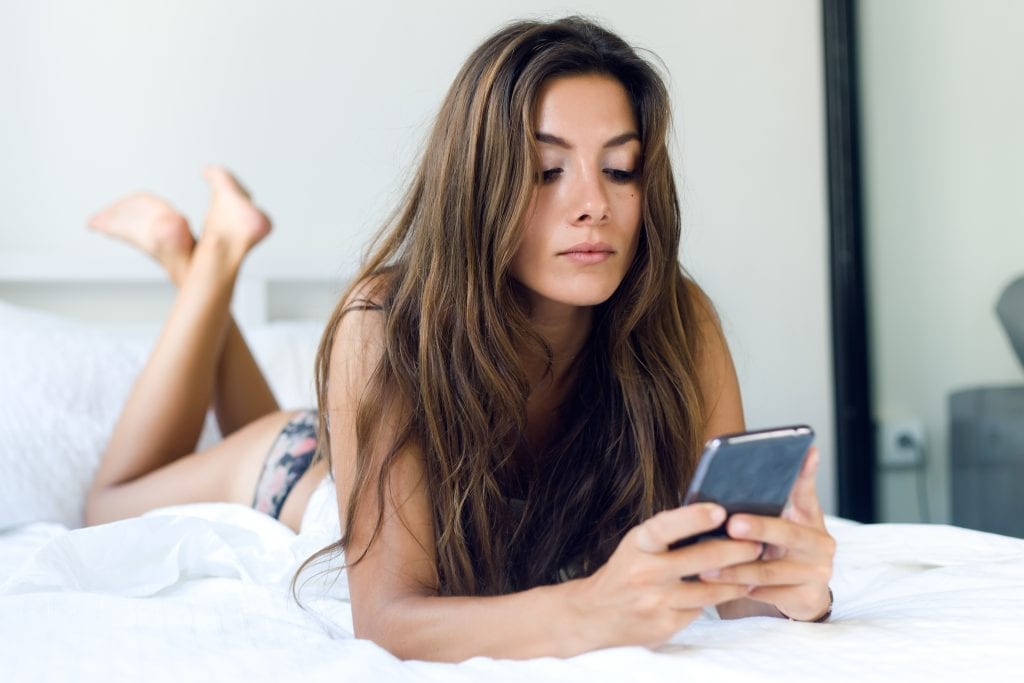 How to Keep Her Guessing Over Text

Every guy knows the pain of meeting a girl, whether she gave you her number or you matched with her on Tinder, getting exchanged, exchanging some messages with her, and then never meeting up with her. Much as it sucked, I’ll tell you what you did wrong and how to fix it…

If you’ve studied martial arts or combat sports, you might be familiar with the concept of “broken rhythm.” It’s a way of making yourself less predictable by varying your strikes. For example, in boxing, one of the first combinations any beginner learns is the old 1-2 (jab-cross). While it’s fundamental of the sport, rarely do beginners land a flush 1-2 when sparring opponents with any sort of experience.

That’s because it’s so fundamental it’s becomes expected. It’s typical for beginners to drill the 1-2 in practice by throwing a hard jab followed by a hard cross in rapid succession (bop-bop!) and so an opponent can anticipate the combo—and counter it. When it comes to fighting, predictability means vulnerability.

Outside the boxing ring predictably may be less dangerous, but it’s still always a factor. Just think about whatever captivates your interest. Maybe it’s a plot twist in in a novel you’re reading, a change of key in a song you like, or even the punch line of a joke you laughed at. These things hold your attention because of broken rhythm.

When things get too rhythmic, too predictable, you can imagine why it leads to boredom. (Just think back to the last terrible television show you turned off!) What you might not have considered is the other end of the spectrum: when there’s no rhythm at all.

Ever have someone try and pitch you on some crazy conspiracy theory? The reason it seemed so “insane” is because it lacked rhythm you could recognize. You couldn’t see any logic or order in it.

Boring television and wacky conspiracy theories aside, you’ve undoubtedly made the same mistake with women, be it the former (acting too predictable) or the latter (acting totally unpredictable).

In Save the Cat, Blake Synder’s excellent book on screenwriting, he explains what Hollywood studios are really looking for in a movie script: “Give them something they’ve already seen before…only different.” Consider that the next time you’re interacting with a woman—especially when messaging, be it text, Tinder, or beyond.

You want to communicate in a way that’s normal…but normal with a twist (a.k.a., a broken rhythm). Make no mistake: adding a twist is just as important as being normal. While most guys make the “predictable mistake” of never breaking the rhythm, it’s just as bad to have no rhythm at all.

If you’re trying so hard to be unpredictable, going to such lengths to prove how “different” you are, you’re going to lose her. Whether it was too much humor, too much teasing, or even too much personality, you lost her for exactly that: you were just “too much.”

Zig When She’s Expecting a Zag

To effectively use unbroken rhythm you only need to recognize two things:

Or, as I like to say, learn to zig when she expects you to zag

Just as a boxer might double—or even triple—up a jab before throwing his cross, one way you could break the rhythm is with deferral, which leads to anticipation. For example, you’ve probably been asked a fundamental question like, “Where did you grew up?” Coming right out and answering the question is predictable, which could lead to an unbroken (and boring) rhythm. However, evading the question completely, while unpredictable, is also weird.

As such, a happy median exists in deferral. Simply hold off answering for a moment or two. It can be as simple as “Wait before I can tell you I need to know…” or something as bold as, “That’s an answer better explained over drinks.” Either way, you’re going to answer her question (because that’s normal) yet you still manage to break a monotonous rhythm (because that’s attractive).

There are countless ways you can mix things up and incorporate broken rhythm into how you communicate with women. To return once more to the fighting analogy, a boxer could change the speed of the punches (a.k.a., cadence), shift levels (jab to the body, cross to the head), to name just a few.

It all comes back to a simple, straightforward, and wildly effective underlining principle: be the sort of guy she’s comfortable with…only different. Now that you understand broken rhythm, you’ll probably start noticing it everywhere. In my next article, I’m going to demonstrate broken rhythm in action with snippets and examples from some interactions I’ve had with women.

3 Innocent Texts That Turn Her On