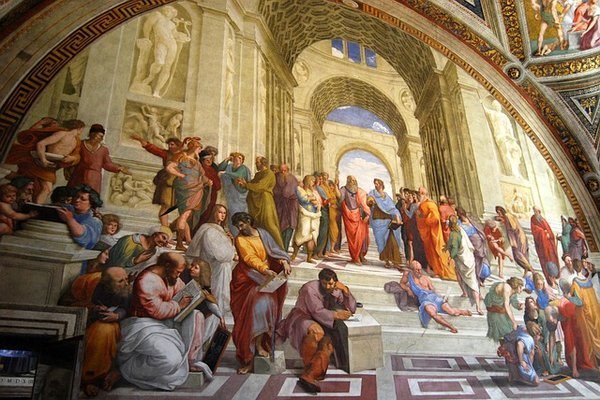 The Greek philosopher Plato was a native of Athens. Born in 427 B.C.E, he was of distinguished aristocratic lineage on both his mother’s and father’s side. He came of age during a time of extraordinary change and crisis in Athens. The Mediterranean empire that the city-state had established in the middle part of the 5th century came apart; it suffered a long, bitter, and brutal war with its military rival Sparta and was convulsed by political and social chaos that resulted from incompetent democratic and authoritarian governments.

It was an age of corruption and uncertainty—in morals, manners, and mind. The citizens of the city, who once prided themselves at being at the center of Greek philosophy and intellectual culture, had it seemed given up on their old standards and ideals. By the time Plato entered adulthood his fellow citizens had come to measure all things by the passions of the mob and the contingencies of power.

The madness of all that he saw around him drove the young Plato into action. After the Greek state murdered his mentor and friend Socrates in 399 B.C.E. Plato took up the work of the great gadfly and turned it into a body of philosophy that remains, in the view of many scholars, unsurpassed.

Plato wrote a great deal. Most of his work has been lost. What we have comes from Thrasyllus, a Platonist philosopher who lived in the Greek city of Alexandria in Egypt in the early first century of the Common Era.

Plato’s Dialogues give us plenty of insight into his way of thinking. The latter consists of a method and dialectic inspired partly by Socrates and partly by his native genius. Much of what Plato thought and said was in response to the moral and mental decadence that he lived through. And it is for this reason that he is most relevant to the times we live in.

As a man of the modern world, you should think like Plato—sometimes. Two of his ideas are especially useful.

The first is being exact—that is, clear and distinct—in the use of language. Most of Plato’s dialogues involve an exhaustive intellectual effort to get at the true meaning of important terms. Much like today, terms such as love, justice, piety, patriotism, and the like were used quite loosely in Plato’s time. He attempts to derive a fixed conception for these words so as to free them from the clutches of frauds and demagogues.

This kind of thinking is desperately needed today; and not only in our political discourse. I am sure that in your professional life you encounter people who like to use jargon and highfalutin technical terms. Such people tend to be confused and uncertain in mind. But no one says anything because no one wants to appear to be without the knowledge that they think everyone else has. You should make a point of being the one person who insists on clarity in thought and language.

But you need not fall into this trap. As long as you are a living, thinking man you can decide to formulate rich and workable conceptions of all such virtues and make it a point to value them in your life.

It is a far gone conclusion that you could not succeed in the world if you went around philosophizing all the time. But thinking like Plato at least some of the time can bring joy and meaning to your life.