I received three really interesting questions from readers this week. We’ve got ex-lovers at weddings, sex videos and lack of attraction. Let’s dive right in, shall we?

Dear Claire, Love the column, it is fun to read every week. The question I have for you is based on a discussion I had with my roommates after this past week’s How I Met Your Mother. Do you think you can you invite your ex to your wedding if you are still friends with him or her? Thanks, Eric.

This is a really tough question because there are so many things to think about. My short answer is that it depends entirely upon the situation and the strength of several factors that should be taken into consideration. My long answer is a bit more complex.

First and foremost: it has to be a two-way street. You cannot say you feel uncomfortable with your partner’s exes being at the wedding if you want to invite someone you’ve dated or slept with. You cannot have it both ways. Either exes will be invited or they will not be invited. That’s only fair.

In that instance, I think there are two things to remember. The first is that there is a difference between you being friends with an ex and actually having that ex there at your wedding. Your spouse might be totally comfortable (or at least okay with) you being friends with an ex, but maybe on the actual day where you stand up in front of your friends and family and take vows and pledge your love, it feels weird to your partner to have someone in the audience who has also fucked you. I know it seems like splitting hairs, but I think (especially with women) that there is a distinction between every day friendship and The Wedding Day.

The second thing to remember is that ultimately your spouse’s feelings trump your ex’s feelings. If you are more concerned because ex-girlfriend Sally is going to be mad she’s not invited than you are about your bride-to-be being comfortable and happy on her wedding day maybe you need to take a step back. Getting married is entering into a partnership and that sometimes means compromise and that also sometimes means putting your partner’s feelings first.

I’m friends with several exes and one in particularly whom I would want to invite to my hypothetical wedding. But if my husband-to-be is uncomfortable with that, then the husband-to-be wins. Putting my foot down and demanding I can invite my ex boyfriend almost seems like I’m saying the ex is more important than my fianc and that is not (or should not) be the case. Spouse trumps ex. That’s really what it boils down to.

The last thought I have about the subject is this: honesty in a relationship, especially regarding ex boyfriends or girlfriends, is key. However, your partner does not necessarily need to know about the night you got drunk at a Christmas party and fooled around with your friend. I have one friend whom I know I will invite to my wedding. One night many years ago we got drunk at a Christmas party and slept together after the party. My husband-to-be doesn’t need to know that. There were no romantic feelings, nothing else happened after that. It’s not worth making my husband uncomfortable around my friend. So keep in mind that silly choices or mistakes or flings are different than ex boyfriends or girlfriends.

Claire – Did you see this story about Swedish hockey player Jan Huokko<http://deadspin.com/5067695/you-do-not-want-to-be-in-jan-huokkos-fave-five>? What are you feelings about the contents of his sex tape? Doug

I think people in general are far too uptight and judgmental when it comes to bedroom activities. But you know what? Everybody is freaky in his or her own little way. Who are you to pass judgment on someone’s turn-ons? 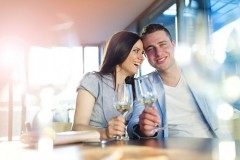 But if my partner did swing Jan Huokko’s way, I wouldn’t act like it was the end of the world, or something scandalous that my partner was asking me to do stuff like that. It takes a lot of courage to verbalize that you enjoy something that is considered “deviant,” and if a partner asked me to do something I was uncomfortable with, I would never laugh or act grossed out. Doesn’t mean I would DO it, but I wouldn’t want my reaction to hurt his feelings.

So, to all the people out there who think this is a big scandal or that Jan Huokko is some sicko pervert: get over yourselves. Maybe something YOU are into is something Jan Huokko wouldn’t touch with a 10-foot pole.

Claire, Here’s a problem I’ve been having recently and don’t know what to do. I have a boyfriend of over a year, whom I love very much. But I no longer find myself attracted to him, which is a real problem in the relationship. Any advice? Thank you! Jenny

Yikes. My knee-jerk reaction to this question is that you probably aren’t going to be together much longer. It is damn near impossible to keep a sexual/romantic relationship going with someone you aren’t attracted to.

My longer advice is to try to figure out if the lack of attraction is due to something else. Are you really busy at work and just too exhausted to have much of a sexual appetite? Did your partner’s appearance change in some way (like putting on weight) and now no longer looks like the guy you met and fell for? Are you maybe just getting to the comfy point in a relationship and the “nothing new is happening” feeling is making you restless or bored?

If it’s a busy schedule, that’s easily fixed. It just involves being conscious of how busy you both are and making a point of scheduling alone time. If it’s a change in your partner’s physical appearance, that’s a little trickier but it can be fixed. It involves a pretty delicate conversation, but expressing to your partner that you have concerns and then suggesting some ways to fix whatever the problem is can be effective. If it’s the “comfortable” stage of the relationship, that really calls for you and your partner to be willing to spice things up. No, you can’t go back to being newly-dating starry-eyed kids who can’t get enough of each other. But you can expand your sexual horizons and keep your sex life interesting and fresh.

If it really is just that your once-lover has now suddenly moved into the Friend Zone, that’s really hard. You still love him and enjoy time with him, but if you aren’t attracted to him that’s classic Friend Zone and it might mean this relationship has run its course. If you truly think this is the cause of the lack of attraction, don’t prolong the paid. Breaking up sucks, but it sucks worse when it’s a long, drawn-out process. Rip the band aid off.

About Claire Sebastian Claire Sebastian is a recent law school graduate looking to hold on to the one remaining piece of her soul by penning a weekly sex column for TSB Magazine. Turn-ons include witty banter, intelligent debates, â€œThese Arms of Mineâ€ by Otis Redding, being kissed on her neck, singing along under your breath while dancing with her, and running your hand through her hair. She can be found writing at various other sites online but under a different name. Guess youâ€™ll just have to wonder whereâ€¦