I’d love to get your thoughts on something. I have been seeing a lady for about a year and a half now, and we both think it might be the real thing for us. Before her I was single for a very long time and got around a good deal. One of my favorite things to do has always been anal sex. I have enjoyed doing it a number of times with most of the women I was with. Even the ones who were hesitant at first or who had a previous bad experience with trying it (not at all uncommon) were able to enjoy it after a little working into it. I am, quite frankly, skilled at the act and know how to take it gradually and let it happen.

My problem is that I don’t want to try it with the woman I have fallen in love with. She has told me of really hating her attempts at it and not being into it. She also knows about my love of it. As we settle into things a bit and explore our sexuality together she has brought it up a few times. Mentioned that she was ready to try it with me, yet I realized that I really wasn’t into doing it with her. I blew it off the first few times it came up but now she is asking me why I’m not pursuing it with her. I still sometimes fantasize about the times I did it before but just have no desire to go there with her. Tell me what you think, please! I desperately want to stay with her and need to figure this thing out. – Charming Bastard

I want to preface my answer with the statement that I am not a psychologist. That being said, my feeling about this problem is that it’s the Madonna-Whore conundrum that so many men have issues with. They want to experiment and get freaky with a wild woman in the bedroom, but when it comes to being that way with the woman who might be The One, they can’t do it.

On that front, I say: take her word for it. She says she wants to try it with you and that means she trusts you 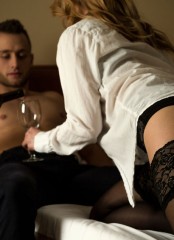 and loves you enough to want to give something she hasn’t enjoyed in the past the ol’ college try. That’s awesome! Take advantage of it! It’s another lame reference, but I happen to agree quite strongly with “a lady in the street but a freak in the bed.” *That* is the type of girl you want.

I mentioned in a previous column that people should follow the rule of 3 when it comes to trying something their partner is interested in: do it once to try it, do it again to get used to it, and do it a third time to see if you like it. If you don’t like it after 3 tries, then it probably isn’t your thing. Also, your partner cannot get mad at you after trying something three times and not liking it. So I advise you, Charming Bastard, to try anal sex with your lady three times. If you STILL cannot stomach doing it with her, then at least you tried it.

I threw some quick facts together about the list. I’m STILL not going to reveal actual numbers, but I have crunched some percentages and sussed out other facts that either I found interesting or were asked of me in emails.

First off, 95% of the list is men. The other 5% is women. Yes, sometimes I find women attractive. Yes, sometimes that attraction comes to fruition. I wasn’t a LUG (lesbian until graduation). It started in high school and it continues today. I even had a girlfriend, all official-like, in undergrad.

On my list, people are listed based on the farthest we got. So I have had sex with 26% of the list. I have made out with 51% of the list. By “make out,” I mean kissing and what the kids call “heavy petting,” but not any downstairs action. I have either (or both) give or received oral sex with 15% of the list. Of course, if I had oral sex with someone and THEN slept with him, he or she would be categorized under “sex.”

There are two sets of siblings on the list: John and Phil C. and Drew and Jordan M.

1% of the list I slept with at the same time.

If anybody wants to know anything else about the list, feel free to ask.

About Claire Sebastian Claire Sebastian is a recent law school graduate looking to hold on to the one remaining piece of her soul by penning a weekly sex column for TSB Magazine. Turn-ons include witty banter, intelligent debates, â€œThese Arms of Mineâ€ by Otis Redding, being kissed on her neck, singing along under your breath while dancing with her, and running your hand through her hair. She can be found writing at various other sites online but under a different name. Guess youâ€™ll just have to wonder whereâ€¦