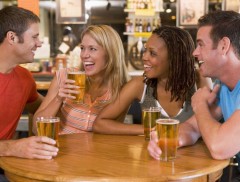 One of the greatest most effective sales techniques throughout history has been “the takeaway.” The Takeaway occurs when the object you’re considering purchasing is suddenly pulled from the shelves.

I saw the power of “the takeaway” firsthand while working as real estate agent selling houses. A client would spend weeks deciding whether or not to put an offer in on a house, and then suddenly the house would go off the market when an offer was put in by another buyer. Client number one instantly “had” to have the house.

I first discovered the power of “the takeaway” for amplifying attraction back in college. I discovered this accidentally but the results were staggering. Over the years I had to work on finding that fine line between displaying some disinterest to amplify attraction, and losing the girl to another suitor by showing too much disinterest.

In this article I will walk you through The Art of The Takeaway.

The Power of The Takeaway In Creating Attraction

Back in college my friends and I would throw massive 400 people keggers. Although these parties would always be fun, the main purpose of them was to make money. At $5 a red cup a normal party would bring in close to two thousand dollars. Because of this fact, my intention at these parties was to make sure they ran smoothly. This meant making sure parking was situated, kegs were full, money was collected, fights were broken up, and everyone was having a good time.

My duty as party organizer led me to stumble upon the amazing power of the takeaway. See, because meeting girls was secondary at these parties to making money, I would often get pulled away from a good conversation, disappear from the party for an hour to pick up another keg, or spend twenty minutes babysitting a puking sorority girl. What I found was astonishing.

My “busyness” at these parties turned me into a hot commodity by the end of the night. For instance, I would be talking to Girl A. I would have displayed some interest, engaged her in a good conversation, and escalated some kino. But I could still tell that the girl was not quite sold. Maybe I would catch her glancing around for someone better, or maybe she would just seem uncomfortable with further kino escalation. Either way, I could tell that she was not ready to be kissed.

In the middle of my conversation with Girl A, Girl B would come over and tell me that one of my friends needs me upstairs help carry a keg. On my walk to my friends I would casually chat with Girl B, while telling Girl A I would be back in a few. After helping with the keg, I would get side tracked with some other job, before finally running into Girl A an hour or so later.

What I would often find is: without having to do nearly anything but re-engage the conversation… attraction was spiked. We would jump right past the comfort phase, and right into the seduction. Within ten more minutes we would be kissing.

What happened? During my time away from her my value started skyrocketing in her mind. I went from being a “sure deal” to a guy who may not ever come back. She would probably imagine that I was off making a move on Girl B or one of the other countless girls at the party. So when I finally came back, she would make the decision instantly to progress the interaction, to avoid the risk of losing me again.

I caught on to this technique quickly and amongst my friends we termed in “The Walkaway.”

How I Improved Results by Turning it Into “The Takeaway”

There was a negative to “The Walkaway.” The negative was that I would lose many girls because of their impatience, their ADD, or their wounded sense of pride. Some girls just simply wouldn’t wait around for me to return. I realized that I needed to take the principles behind “the walkaway” but use them in a way in which I didn’t need to leave the girl alone for vast periods of time.

I found that I could use subtle indicators of disinterest, or takeaways, that would achieve the same result. The idea behind a takeaway is to make her do two things:

So instead of walking away from the girl I would do subtle little things to keep her off balance and make her work to keep my interest. These things include:

The secret to using takeaways effectively is to make sure you reward her when she does something to win back your attention.

In Mehow’s book Get the Girl he calls these Directives. A directive is giving her some indicator of what she needs to do next to please you.

A directive is basically a way to make her work for your approval. By her working to keep your interest, her attraction towards you increases. Plus, every time she does anything for you she is displaying another IOI signaling to you that the interaction is progressing.

Here are some  examples of Directives:

The whole idea of these directives, given after the use of a takeaway, is to get her to do things that you can reward her for. Remember, the more she works to keep you interested, the more her buying temperature increases.

If you find that after creating an initial attraction, the girl seems to lose interest midway through the conversation than you really need to make use of the power of the takeaway.