She’s Not That Innocent…

She’s Not That Innocent 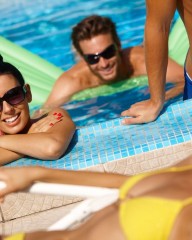 A typical email I get from readers at TSB usually asking a question about a girl he wants to seduce usually contains the line “she’s not that kind of girl” or “she’s the innocent type.”

I thought it was time I put to bed the myth of the innocent girl. I”ve been around the block enough times to tell you that there are very few innocent girls out there- just girls that are more deceptive.

Instead of spending this article ranting about the deceptive nature of women’s innocence- I figured I could sink the lesson into your brain deeper with a story. My difficulty was not not finding a story that exemplified the myth of the innocent woman- my difficultly was choosing which of the countless examples I would use.

The story I chose occurred back when I still working part time as a waiter. 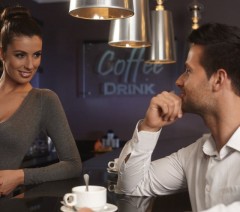 Come the end of May, the restaurant I used to work at would bring in a handful of college students who would be hired as “summer help.” This was a particular joyous occasion for me and a couple buddies I worked with, as it always meant a fresh crop of girls for a few months.

This summer the “bitch of the bunch” was a girl named Vanessa. She was cute- not spectacular- but had a fun, bubbly personality that made most of the guys there pay extra attention to her.

She was 19, and within five minutes of talking to her I discounted her as summer fling material. She talked about “the guy she was seeing back at school” and made a few other comments that led me to believe “she was the innocent type.”

I had just gotten out of a relationship that summer and the last thing I wanted was “the innocent type” I would have to work for and make fake promises. All of the other guys must have also been scared away by her talk of “the guy she was seeing back at school.” She went back to school that fall without any of us getting our grubby hands on her.

I forgot about Vanessa until she showed up again that December. She came back to work part time while she was on winter break back at school.

I had just blown through a string of conquests that had my confidence at an all time high. I decided that even though she was “the innocent type” who would be on her way to her boyfriend back at school before I had a chance to close the deal, I would flirt with her and see what happens.

My good buddy, Matt, had the same idea. Matt and I had already scored a majority of the girls we worked with- so when fresh blood arrived- we would both gather around waiting to pounce.

Matt and I developed sort of a friendly competition in regards to getting with Vanessa. We would take turns flirting, taking smoke breaks with her, and eating dinner with her after our shifts ended. Anytime either of us thought we were getting some where, the other one would step in and steal her attention away. This continued for about a week.

That Friday night a bunch of us from work decided to grab some drinks when our shift ended. Both Matt and I personally invited Vanessa. She happily joined us. 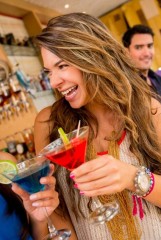 The night started at a local pub. There were about nine of us. We drank heavily.

As the night progressed, one by one our co-workers left- until it was only me, Vanessa, and Matt left. As last call was made at the pub- the three of decided to go to another bar down the road that was open until 3am.

Matt, Vanessa, and I all continued our fun and flirtatious ways at the second bar until about 3:00. At which point, Vanessa suggested we go back with her to her parents house to play pool in her basement.

“Lets flip a coin and see who gets her” Matt says to me when we arrive at her house.

“You drove- I can’t leave without you. Looks like I win.” I say.

“No way man… I’m too drunk to drive.” Matt says. “And besides I really want her more.”

Vanessa grabs us some beers and we begin to play pool.

I decide that if this night is going to go anywhere for either of us, I would need to break rapport, and take the conversation to a more sexual frame. Within 10 minutes we are playing a game of strip pool. Everytime we miss a shot- an article of clothing must come off.

While the game of strip pool was going on, the conversation turned toward our co-workers. We all began talking about who we would most like to hook up with at work.

Shoes come off first. Then socks.

I tell her my number one is this 42 year old cougar that works as a host.

“I can totally see that” Vanessa says. “She is hot for an older woman.”

“Its definitely one of you two” she says.

My shirt comes off. Matt takes a sweater off but has a t-shirt underneath.

“Does that hot tub work” I ask her.

“Yes” she says. “But my parents will probably wake up if I turn it on”

“I guess will have to just keep playing pool” Matt says.

“Well… I wasn’t going to say anything.. but now that you brought it up” I say.

We all laugh for a minute.

Matt and I are down to our boxers. Vanessa has her shirt on, but is in her panties.

“I can’t believe the two hottest guys from work are in my basement shirtless” Vanessa says.

“Yes, it must be your lucky day” I tell her. 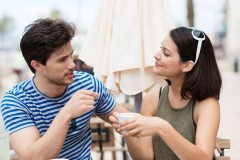 I decide that strip pool has run its course. I suck at pool and did not want to be standing naked in front of the two of them after my next missed shot. I suggest we play truth or dare. I figure that game will allow us to force Vanessa to choose which of us she wants.

Truth or dare begins with a handful of “truths”

It is quickly revealed that if Vanessa had to have a one night stand with anyone at work- it would be me.

In the next round Matt dares Vanessa to hook up with me. I begin kissing Vanessa.

It looks like I won the competition. Except- there was so much sexual tension in the air that I wanted to up the ante. On my next turn Vanessa chooses dare… I say “Hook up with Matt.” 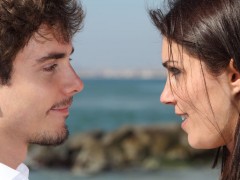 Vanessa turns to Matt and they start making out. Matt is kissing her much longer and much more passionately than I did. I begin to feel like maybe I just shot myself in the foot. But a second later Vanessa pulls away from Matt and calls me over. I walk towards her and she begins kissing me again. And then she pulls away and begins kissing Matt.

Wanting to be the first to get in there, I hop up on the pool table and climb on top of her. Matt is massaging her breast as I slide inside her. She grabs Matt’s dick and starts playing with it.

Just as I begin to get a rhythm going there is a loud noise from upstairs.

“Oh my god… my parents just woke up” she says. “You guys have to sneak out”

In a flurry Matt and I rush to put our clothes on. Within two minutes we are all dressed. The only problem is that her parents are in the kitchen. In order for us to leave the basement we need to pass through the kitchen.

After 5 five minutes of waiting, Vanessa informs us that there is no way around it. Her parents would not leave for work for another 45 minutes. We would have to walk out past them.

Matt and I do the walk of shame past her parents. 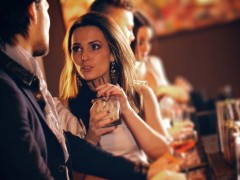 Over the next four weeks, Matt and I took turns fucking Vanessa. On nights that she worked with me she would go back to my house. A week later she went back up to Connecticut for school.

“Can we come and visit” I ask her.

“No… I don’t think my boyfriend would appreciate it.” she says.

She’s Not That Innocent…