It’s Time to Be the Hero in Your Own Movie

As you begin to view each moment in your life as a scene in a movie; these moments will tend to take on a greater significance. You’ll begin to realize that a few botched, boring, or drawn out scenes can kill the momentum of an entire movie.

But there is a greater benefit to viewing life this way.

Once you realize that you’re the star you’ll find that your awareness kicks up a notch.

How often have you found that you’ve basically let yourself fade into the background? How many times have you watched as someone else walked away with the leading lady? In fact, I bet there are times that if it wasn’t for your face staring back at you in a mirror you’ll have completely forgotten you exist.

And as you’ve confined yourself to a shitty supporting role, your movie has turned into something your grandmother would be bored to tears watching.

This doesn’t happen to the “hero.” The hero is hyper-aware of everything that is going on around him. He is 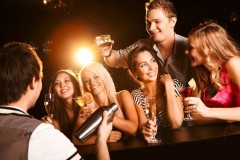 Don’t take this the wrong way. I’m not telling you act like the selfish, spoiled movie star who only cares about how his hair looks on camera. I’m not telling you to adopt a selfish attitude of “it’s all about me.” If you look at the guys who seem to have it all; money, success, women… most of these guys are not selfish pricks that only care about themselves. But they DO command the attention of a star- because they are.

It’s time that you think of yourself as the protagonist in the most exciting movie ever produced. The movie should contain a splash of comedy, some intrigue, adventure, some drama, romance, and whole lot of sex scenes!

Living your life like it is a movie means you need to constantly be aware of the ROLE you play. Your character can go through a hundred metamorphoses if you want. He can be banker, a fireman, a waiter, a rockstar, a rock climber, a college student, a world traveler, a photographer… in fact, throughout the course of the movie he can be every one of these things. The important thing is that he is consistently playing the STARRING role.

It’s Time to Be the Hero in Your Own Movie