A “Secret” Strategy For Getting Better With Women

If you’ve spent any time at all trying to learn how to get better with women you’ve probably read advice on overcoming approach anxiety, using openers, be cocky and funny, tell stories, pass shit tests, and an entire checklist of do’s and don’ts in regards to dealing with women.

All of this is great advice.? But last month, while doing a podcast titled “The Factors Keeping Men from Success with Women”? with Mack Tight, we stumbled onto an entirely new problem many men face, that is most likely holding them back from meeting more women.

And this problem is hardly ever talked about.

Making Friends with Other Men

Now it’s taken me the past month of tossing this idea around my mind, reflecting on past observations, and really paying close attention to the interactions are around me, and what I’ve come to realize is that most men could drastically get better results with women simply by learning how to interact better with other men.

Let’s face it, part of the reason men have difficulty attracting a beautiful woman is because of deep seated self esteem issues that most likely stem from a feeling of not being accepted, or being “different.”

Many of these same men spend years avoiding social gathering all together.? These men rarely interact with any guys outside of their small circle of “comfortable” friends.? Most of the time these “comfortable” friends are just as inexperienced and lacking in social intuition.

Because of this these men never learn valuable skills in dealing with other men.

Skills Needed for Dealing with Other Guys

Some of the most important skills for dealing with other men include:

As I was tossing this idea around my mind and paying close attention to the interactions around me I discovered that there is an extremely close correlation with the ability to befriend alpha males and the ability to attract a beautiful woman.

I noticed this first hand at the weekly Salsa lessons that I attend.? The lessons each week are filled with over 30 people.? It is about half men and half women.? What I noticed that was interesting was that certain men- who had previously never met- quickly became friends with other men.? And other men either only interacted with the one or two friends they came with, or simply made very little social conversation with those around them.

Now I found myself in a group with three other guys who quickly got to chatting about local bars, sports, Salsa, and a variety of other topics.? What I found even more interesting was last week there was an “open” class where students can bring a guest for free.? Out of the four guys that had made friends, three of us brought really attractive girlfriends to the event.? The other friend of ours quickly befriended one of the sexiest girls there and has been hanging out with her since.

This night confirmed my suspicion that men who are able to befriend and interact with other cool men, are much more likely to find themselves involved with beautiful women.

I think that there are a variety of reasons for this… 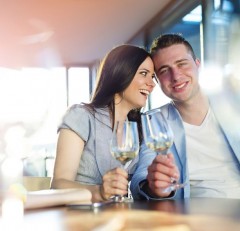 It is no secret in the “dating advice” columns that one of the most important elements of attracting women is to create social proof.? If you were able to quickly befriend other dominant alpha males this alone would act as an impressive form of social proof.

Using our Salsa class as a lesson, it could be said that by the four of us men quickly establishing a little social circle within the group, we gave each other value.? And simply through this friendship we all became more attractive to all of the women in the class.

Women also have a sixth sense as to who is the leader of other men.? It is no secret that women want a dominant, alpha male.? One of the easiest ways to indirectly display these characteristics to a woman is to be a leader to the men around you.

On the other hand, if you are easily pushed around by other men, or have trouble interacting with them, women will notice, and often subconsciously disqualify you from her consideration.

The benefits of being able to interact with other men go much further than simply the social proof it provides for you.

Cultivating the ability to become “a leader among men” is also a natural confidence booster.? Have you ever resisted approaching a woman because she was with guys?? How much less approach anxiety do you think you would have if you didn’t harbor a secret fear that a bunch of guys she knows will walk over and interrupt your conversation at any moment?

Here is a list of some of the other benefits of getting better at making friends with “cool” guys:

As you can see there are many benefits to cultivating the ability to make male friends.

How do I get better at dealing with men?

Well, this is an entire lesson on its own.? But I want to leave you with some tips for making friends with “cooler” more alpha men.

The first thing you need to do is simply force yourself to interact with these men more.? This is similar to overcoming approach anxiety with women.

Start by making it a habit to say “Hey, what’s up?” to the men in your classes at school, standing next to you in a bar, or at parties.

This will feel a little awkward at first, but just like talking to women, it will become easier and more comfortable the more you do it.

The second thing you should do is make it a habit to become knowledgeable on more the more common topics men like talking about.? These topics include:

One of the things that I do to keep up with good conversational topics is to read the New York Post every single day.? The Post is more of a tabloid style paper that gives you a quick fix of world news, politics, celebrity gossip, stock market, and sports.

By simply reading a newspaper like The Post every day you will always have a variety of things to talk about with other men.

Getting better at interacting with men is really just a matter of practice.? If you begin? to make it a habit of socializing with cooler men, you will get more and more comfortable in those situations.

If you make the effort to get better with men, you will quickly find that more women seem to naturally come into your life.

A “Secret” Strategy For Getting Better With Women