Spice Up Your Life with CAJUN: Part I of the TSB Spotlight of the Lovesystems’ Badass

This article does not begin until you pop a beer open, turn up some classic rock from between the years 1971 and 1974, and get ready to talk about babes between the ages of 21 to 21 and a half. That’s because this article is about Cajun and he’s not your typical dating instructor. In fact, there’s a good chance he’s punched your typical dating instructor in the face.

Sure, we all saw his impressive showing on Keys to the VIP, but who’s the man behind the porn-star mustache and million-dollar mouthpiece? If you’re ready to grab life by the tits, you’re ready to read about the larger-than-life Lovesystems instructor who is guiding men out of the nerd labyrinth of trickery and tactics to real-world results with hotties. As his blog bluntly affirms, Cajun’s ‘spice’ is “Chicken soup for the…fuck you.”

Things, however, didn’t always come this easy for Cajun. Unlike many guys who seek out dating advice, Cajun explains, “I was never that bad.” Growing up, Cajun’s wit and acting talent opened doors for him with the ladies. The problem was he never …well…”closed” those doors. He laughs, “I mean, I had bones thrown at me, I just didn’t know what to do!” Situations presented themselves, but the young Cajun was unsure how to proceed.

Later, when he went to university in Toronto, he watched naturals, but explains, “I didn’t really learn. The real learning happens behind closed doors. It’s learning what to do with attraction.” He must’ve learned something as Cajun spent the next two years in an exclusive relationship.

Once that ended, Cajun says he was “back to square one.” One of his friends, noticing the spurned Cajun, lent him a copy of Strauss’ The Game, hot-off-the-press in 2005. At first he wrote off “studying dating success” as fiction. But once he delved into the book, he realized it spoke to his talents. “Cocky-funny?” he snaps, “I was already doing it!”

Moreover, using “lines” seemed a natural fit for the theater major. “When I saw these guys were using lines, I thought, ‘I’d be amazing! I’m already an actor!’ I was totally sold!” he exclaims. And so a neophyte Cajun set out to learn game proper in every conceivable crevice of Toronto. “I was bit by it,” he says of the near obsessive-drive he had to master pickup.

He recalls one serendipitous occasion that, ironically, had little to do with meeting women; instead it had to do with meeting a guy. After hopping on a packed city bus, Cajun noticed two cute girls. He chatted with them, strictly adhering to the structure modeled in The Game. The entire time an eavesdropper sat just a few seats away, silently critiquing Cajun’s performance.

When he got off at his stop, the ‘mystery’  listener revealed himself, as Cajun recalls, “He caught up with me and gave me props for picking up the two cuties on the bus. We started talking and I explained how I had just read a book about picking up women and that I’d been practicing that night and the shit was working. He mentioned that I reminded him of his old friend Erik, who also used to take a scientific approach to talking to women, and since I had just read The Game, I jokingly asked if Erik was a magician. He looked at me cryptically and said “Yeah, he is…how did you know that?” That’s when I was like “HOLY SHIT!””

Indeed, both men knew Mystery, but in different contexts. The eavesdropper introduced himself as Sasha, a friend of Mystery’s before he was ever made famous by The Game. Cajun caught Sasha up to speed, explaining Mystery’s systematic pickup method. Little did Cajun know at the time, but he’d just “debriefed” his new wingman, who also went on to become a dating coach.

“We became fast friends,” says Cajun, “We went four nights a week, for six months.” The focus of these nights, however, was not necessarily to seduce women. Instead, the duo was more intent on trying different things, even if it meant rejection or embarrassment. “There were nights we’d just see how hard we could get blown out,” chuckles Cajun. “I’d say to Sasha, ‘Okay, you have to try to get a drink thrown in your face this time.’” 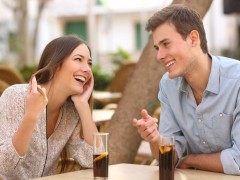 One of the reasons Cajun was able to go out night-after-night, approaching set-after-set, was he never said, “Okay, we’re going out to pickup chicks.” Instead, he and Sasha hit the Toronto nightlife prodding each other to enjoy the night. “It was all about the experiences, creating a fun vibe,” Cajun says. If either felt upset or depressed, he would be forced him to do “five more sets.” After approaching more five sets, the rule was they could go home. “We never ended up going home though,” recalls Cajun. “You’d always have at least one good one in the five. And that would totally flip your mood.”

It was during these nights, pushing the envelope of his comfort zone and proper society’s definition of proper behavior, that Cajun transitioned from structured game to a more natural approach to meeting and attracting women.

Learn what Cajun did and the mindsets he implemented with the second article in this series. In the meantime, learn more about Cajun at his blog.  Also, find more information about Sasha, Cajun’s wingman and friend, as well as dating coach in Europe.

Spice Up Your Life with CAJUN: Part I of the TSB Spotlight of the Lovesystems’ Badass