The Secret to Getting a Girl You’re Compatible With

When I was young and inexperienced with women, I was so hungry for a physical relationship that I sacrificed my standards. Not a good idea. 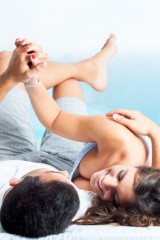 Now, don’t get me wrong. I’m not saying that you should never sleep with girls you’re not compatible with, I’m just saying don’t make them your girlfriends. A relationship is time consuming, emotionally draining, and sometimes a downright burden. And if you’re in a relationship with a woman you’re not really into – the negatives will be multiplied by the thousands. This is why I recommend spending the time to figure out what kind of woman you want to have a relationship with, and focusing your attention on attracting her into your life.

The big mistake men make is they assume that because a woman has a few of the same interests as him that will get along as a couple. But this just isn’t the case. When it comes to finding the right woman for you, there is something more important than looks, personality, interests, or hobbies. And it is called “How you see the world.”

How you see the world

How you see the world is largely determined by how you answer the following questions:

Are you controlled by your ego, your need for approval, and your desire to be better than others?

Do you use logic to make your decisions?

Or are all of your decisions based on emotions?

Do you find the comedy in things? Or relish in drama?

These are all the types of questions you want to ask yourself. Why? Because you want to find a girl who shares the same world view as you. I can tell you from experience, that there is nothing worse than making a logical argument to a woman who basis all her decisions on her feelings.

What are your core values?

I never realized the power of “core values” until going through a long term relationship.  I discovered that one of my core values is “freedom” and discovered that I can’t date a woman who is emotionally needy or threatens that freedom.

I’m not going to get into how you discover your “core values” because that will take up an entire post. But I want you to be aware that things like “core values” and “How you see the world” go a lot further towards finding a girl like you than similar taste in music or movies.

Having trouble keeping a conversation going? Grab my free “Small Talk Tactics” Report. It includes a 27 page lesson on “sexy” small talk plus a one hour audio lesson on conversation skill building. Get it now.

Related Video: How To Make A Girl Fall Desperately In Love With You