The Inner Game of Approaching Women 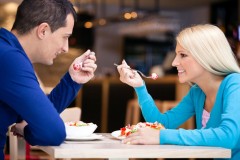 In anticipation of his upcoming release of Unbreakable, I had a chance to interview Christian Hudson on a variety of topics such as overcoming sticking points, inner game, and what women want. Christian also recently released a really solid free video on opening a conversation with a woman and keeping the conversation going. Watch the video now.

This is a two-part interview with Christian Hudson, of the The Social Man.

1. What do you believe is the major “sticking point” keeping guys from achieving success even after studying pickup and seduction for months or even years?

It could be anything, and that’s the tricky part. I worked with one client who genuinely didn’t like women. Another had what I call a low “negative feedback threshold” – his ability withstand negative feedback from women (in other words, rejection) was so low that he screwed up all sorts of things in the first 3 seconds. Some guys are “tough cases” and that’s nothing to be ashamed of. I had foot-in-mouth disease for years, and I still let something royally stupid slip every now and then.

But if I had to pinpoint one thing, it really would be a guy’s beliefs and worldview. A fun guy who likes women and believes, deep down, that women like him – women are going to like him. This deeper stuff isn’t sexy to learn about – it’s not the stuff that is necessarily fun to work on – but it’s important. We recently worked with a guy who had slept with quite a few strippers and real hotties, but who couldn’t keep a woman around for more than a week. He was absolutely miserable. A lot of people would have looked at his situation and thought “gee, you’ve got it great” but his true level of confidence and self-discipline was so weak that women just ran away the moment they got to know him. And this is what I see more than anything else from the guys who are in this for more than a year.

2. What is the first “internal” step a guy needs to make in order to begin to change his approach to meeting women?

Well it start with an accurate diagnosis, so to speak. It’s hard to fix something if you don’t know what’s broken.  There are six core components of “inner game”, and each of those can be looked at individually. A guy might have a huge blind spot to something that’s holding him back, and without accurately knowing the whole landscape, he may be searching for the answer in the wrong corner of the map for years. So besides admitting that he needs to work on something other than his “game”, figuring out what that thing is is really important.

For example, if a guy has a tremendous aversion to approaching women – and frankly, there are some men who just HATE it – then he should realize that and start thinking about other strategies. Should he do online dating? Should he build a big social circle? The moment you understand your strengths and weaknesses, you can start to come up with solutions that work for you, rather than gritting your teeth and trying to develop skills or aspects of a personality that just aren’t you and that make you unhappy. I know a lot of guys who labor under the delusion that if their cold approach skills aren’t tip-top, then some other dude can come along and AMOG them or steal their girl or whatever.   So it becomes a defensive posture, rather than something a guy does because he wants to bring new people into his life. You see the mindset shift that happens when you start acknowledging your strengths and weak points, and working towards what you really want?

3. What is the biggest misconception men have about the women they are hitting on?

That all women respond to the same things. The evolutionary biologists, and hence the PUA community, have this idea that we are slaves to our DNA – just machines for survival and replication of our genes. There’s strong evidence to support that, but at the same time, people have a set of socialized preferences, interests and emotional thresholds that can’t be accounted for with evolutionary biology theory alone.

Here’s an example: It is well known that women like “alpha” men, so being “dominant” should be an attraction trigger. But for many women, too much dominance is really uncomfortable. If you go hard down that path, you’re going to sleep with a lot of women, but you’re also going to screen out a lot of women who just don’t respond to that behavior.

In theory, they *should* respond to it, because dominance = alpha = best reproduction option (although it’s not quite that simple) but they simply don’t dig it.  On the other hand, I see a lot of men who could stand to be a lot more assertive 😉

The point is that yes, our genetic nature programs us to respond to certain things, but our unique human nature adds some variables to the equation.  We dive pretty deep into these in Unbreakable.

>>>Watch the free “Instant Attraction” video:  How to open a conversation and have her chasing you in three minutes.

The Inner Game of Approaching Women