Does Eating Too Many Eggs Raise Cholesterol

There is a long-held notion that if you consume too many eggs, specifically the egg yolk, that you will attain unfavorably high cholesterol levels. This does make sense, considering that eggs are very high in cholesterol. Each egg has over 200 mg of cholesterol, which is a substantial amount.

Despite this understandable logic, the actual effect of eggs on cholesterol may surprise you.

Listed below is the typical nutrient profile of one medium-sized egg:

For only one 70 calorie egg, this is a very good nutrient profile, packed with protein, vitamins, and minerals.

Studies on Eggs and Cholesterol

1. A study published in the European Journal of Nutrition, showed that increasing dietary cholesterol from eggs did not raise LDL (bad) cholesterol levels. In the study there were two groups. One group consumed 2 eggs daily while the other group did not. Both groups were on calorie-restricted diets, and by the end of the study, both groups had lower LDL levels, and both achieved significant weight loss. 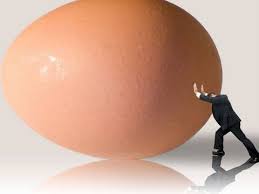 2. Performed at the University of Connecticut, a 12-week study was performed on the effects of eggs on cholesterol. In the study, both groups were on carbohydrate-restricted diets. One group consumed 3 whole eggs daily, while the other group consumed an equal amount in the form of egg substitute.

On a general basis, is optimal to have a cholesterol ratio in which the HDL is high and the LDL is low. This study showed that egg consumption can significantly help with this ratio of good cholesterol to bad cholesterol.

3. Another study published by Mahidol University in Bangkok, Thailand, included 60 subjects who were an average of 61 years old, hyperlipidemic, and were being treated with lipid-lowering drugs. Hyperlipidemia is defined as an abnormally high amount of fats in the blood.

The subjects were told to add 3 eggs daily to their diet for the duration of the 12-week study. By the end of the study, those consuming 3 eggs daily showed increased HDL levels and an improved HDL-LDL ratio.

4. The final study I will discuss in this article is a case study published by the New England Journal of Medicine. This case study was of a man who consumed 25 eggs on a daily basis, for over 15 years. Consuming 25 eggs a day equates to 5300 mg of cholesterol daily, which is a lot of cholesterol!

After performing a nutrient profile on him, he was shown to have very healthy cholesterol levels. I am by no means implying that you should start consuming this many eggs, but this was a very interesting case study showing the effect, or lack thereof, of eggs’ effect on LDL cholesterol levels.

It appears that the idea that there is a correlation between egg consumption and “bad” cholesterol, is a myth. In my attempts to find studies linking increased egg consumption to increased LDL-to-HDL cholesterol levels, I failed. There simply does not appear to be much evidence showing that eggs have a negative effect on cholesterol.

This myth appears to only be present because there is a high level of cholesterol in eggs. However, this does not translate to high cholesterol levels in the body.

And not only do eggs not appear to have a negative effect on cholesterol, they appear to actually improve cholesterol levels in the body, by improving HDL concentrations.

Thus, you do not have to resort to egg-substitute, egg whites, or severe egg restrictions. Eggs are extremely nutrient dense and are great additions to a healthy, well-balanced diet. As with everything in life, moderation in regards to your egg intake is still advised.

Does Eating Too Many Eggs Raise Cholesterol