BHA And BHT: Harmful Preservatives You May Want To Avoid

When you go to a store and buy some kind of packaged food, chances are it contains some kind of preservative. Foods naturally perish very quickly without the use of these preservatives. This is great in regards to allowing for transportation of food and increased shelf life. It allows more people to eat, and to be able to store food for longer, which is both convenient and, at times, life-saving.

This, however, does not come without a price. Many preservatives have some nasty side effects, and limiting these chemicals is advised.

Two preservatives that you may want to avoid are BHA and BHT.

What Are BHA And BHT

BHA and BHT are common food additives that act as antioxidants in many of the foods we eat. Without the use of temperature control or preservatives, most foods will spoil as a result of oxidation.

This helps preserve the freshness of the food being consumed, and is a great way to prevent the fats from becoming rancid.

What Are Possible Dangers Of BHA And

ods to be safe if eaten in a certain allowed amount. Independent research has supported the FDA in stating that these preservatives are generally safe, but that there are certain red flags that require more research.

Although there has not been too much research conducted on humans, there have been some studies done on rats.

With that being said, we are not rats, and humans may respond differently, so ideally, a study on humans should be conducted to get a good understanding of the health effects of BHA and BHT.

According to the National Toxicology Program, BHA is likely to be a human carcinogen.

Studies have brought back many mixed results. Some animal studies have found that BHA and BHT may actually have anti-carcinogenic properties, while others have showed that these preservatives are quite harmful.

Well That Makes No Sense…..

You heard it right. Some studies, such as a 1999 Taiwanese study, showed that BHT prevents and decreases cancer formation.

However, other studies, such as the 1996 study conducted at the University of Hamburg in Germany showed that although BHT can have anti-cancer properties, toxic effects to the lungs, and tumors to the liver, have been shown in experiments taken place over a long period of time.

There are many other studies that show BHT’s carcinogenic effects. BHT has been shown to have harmful effects on the kidneys, liver, lungs, and blood coagulation.

A study conducted in Argentina in 2006, showed that BHT does not retard cancer, but actually causes it to worsen.

There are many more studies that also support the potentially harmful and carcinogenic effects of BHA and BHT. 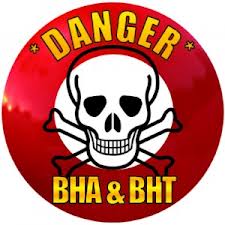 The amount of these preservatives that we consume in our foods is substantially lower than the quantities used in the study, however, so this needs to be taken into consideration as well.

In conclusion, there are many mixed results in regards to BHA and BHT. Although some studies indicate that they may even have cancer-fighting properties, most of the studies show that these preservatives have very potentially harmful effects on the body.

In low quantities, these preservatives may be safe to consume, but why risk it? The state of California considers BHT a carcinogen, and, well, it definitely does appear to be that way.

BHA And BHT: Harmful Preservatives You May Want To Avoid