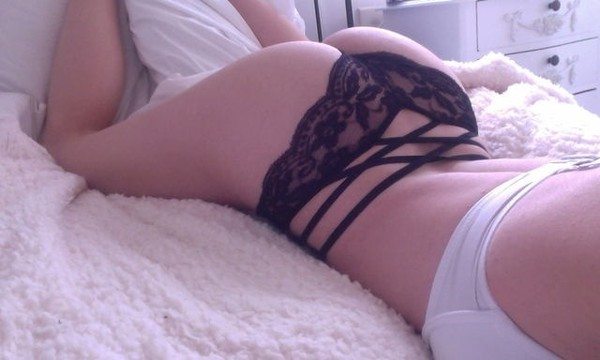 It gets a little crazy because we share literally EVERY detail of our latest hook-ups;)

…Well, you’ll never believe what the topic of conversation turned to the other night—FINGERING!

And guess what—it turned out that every single one of us LOVES it when a guy takes the time to work our pussy with his fingers…Actually, I think most women do.

Anyway, since we were on the subject, I decided to tell my girlfriends about this CRAZY one-night stand I had a while back…

And…I thought you might want to hear about it, too!

Here’s how it happened to me for the first time…

I met this guy—Jason—last summer at the beach. I was laying out in a sexy little bikini, covered in oil, when suddenly this guy comes up out of nowhere, sits down right next to me and starts chatting.

He told me his name was Jason and that he’s a full-time busboy at a restaurant near by.

Now…Jason wasn’t a bad looking guy, but what really struck me was how COCKY he was. He didn’t seem nervous at all about going up to a hot girl he didn’t know…and even when he talked about washing dishes for a living, he sounded so confident, you’d think he was telling me about making millions on Wall Street.

Naturally, I assumed he MUST be really well-hung, to be this arrogant.

“I bet you have a monster cock inside those swim trunks,” I blurted out.

That was when Jason got weirdly quiet for a few seconds…then he said, “I know how to make a girl scream, let’s leave it at that.”

Our little chat was starting to really turn me on…”Prove it,” I replied.

So…We went back to his apartment, and after a couple drinks wound up making out in his bed…I was getting really excited to finally see his massive shaft.

But when I took off his boxers, I was absolutely SHOCKED by what I saw…

Jason’s dick was TINY…Seriously…it was one of the smallest cock’s I’d ever seen. But the worst part was…it didn’t wasn’t even remotely hard!

I thought I maybe if I sucked on it a little, his cock would get harder…so I was about to put it in my mouth…But all of the sudden, Jason pushed my head away from his dick.

At this point, I was on my knees, bent all the way forward, with my ass slightly raised up.

“Stay just like that,” Jason told me, “I can’t get hard until you cum”…Then he got behind me…

He started by gently running his middle and index fingers around the opening of my pussy in a circular motion…And when I started getting wet (which was almost immediately), he finally allowed them to slip inside.

Jason slid his fingers in and out…slowly at first, but gradually increasing in speed and force…and it felt AMAZING. He also surprised me with unexpected sensations.

…Like thrusting his fingers deep inside my pussy—but instead of pulling them back out right away, he’d pause to push up on my G-spot…Or going hard and fast—while twisting his fingers vigorously from left to right.

I thought there was no possible way for my slit to feel any better…But I was wrong once again.

Still thrusting his fingers hard in and out of my pussy, Jason reached around with his other hand and began stimulating my clit…

But when he unexpectedly shoved two more fingers inside my dripping wet pussy…I exploded in an orgasm that I could feel throughout every inch of my body, for what felt like several minutes…

Needless to say, I now knew what Jason meant when he said he could make a girl scream…

I guess that having such a small penis forced him to discover the ULTIMATE position in which to finger a girls pussy…While simultaneously hitting two other cum-inducing points of pleasure.

Before you even get to this part you are going to have to learn how to talk to a girl, but learning these skills will set you apart from all the rest!

In case you want to try the doggie-style finger blast the next time you fuck, here’s a little visual to help illustrate exactly what goes where…I like to call it the ‘The Puppetmaster’ 😉

(If you can’t see the images, click the “Display Images” button.)

Now, this position is INCREDIBLE, but there are a few other ways to finger her pussy, that I think every guy should know about….

1. The Thumbelina: When she’s laying on her back, insert your middle and index fingers inside her vagina, with your palm facing up. Position your thumb on top of her clit. Next, rather than thrusting your fingers back and forth, push them upwards instead, putting pressure directly on her G-spot…hold for a second, release, then repeat…All while working her clit in a circular motion with your thumb.

2. The Doorknob: Start by putting your middle and index finger inside her pussy (the angle of entry doesn’t matter). Twist your whole hand to the left, like you’re turning a doorknob. Then twist the “doorknob” to the right…Continue twisting it back and forth at alternating speeds.

3. V-Formation: Make a “peace sign” or “V” with your index and middle finger. Place your hand on her pussy—palm down—so her clit is at the center of the “V.” Alternate between squeezing your fingers together and sliding them up and down the lengthwise along the sides of her clit. MEANWHILE, you should be using your thumb to tease her hole with gentle bursts of pressure—but no penetration…until she’s BEGGING for it!

4. The Clit Boggler This move is ALL about clitoral stimulation. Start by using your index finger to move her clit up and down. Gradually increase the amount of pressure and speed of motion. Next, change the movement of your finger from up and down to side-to-side…frequently change the tempo, so she’ll never know what to expect. At this point she should be close to orgasm…Finish her off by using TWO fingers (middle and index) to rub her clit in a brisk, circular motion…Don’t stop until her pussy soaks your sheets;)

About Shawna Lenee Shawnee Lee is a pornographic model and actress.