What to wear with Chuck Taylors 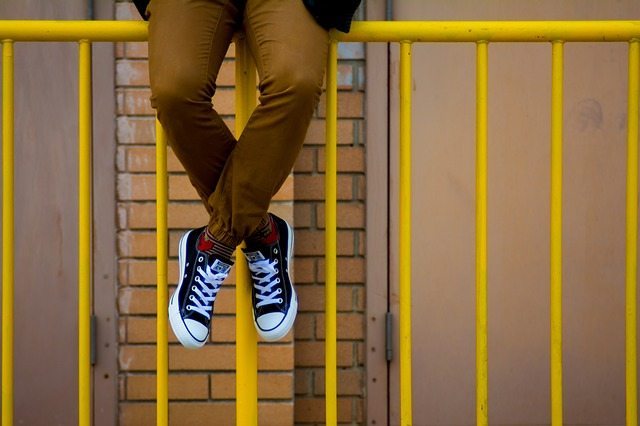 How to take your Converse from drab to dashing

Regardless of your age, you will remember Converse from your youth. Perhaps you are a geriatric that remembers when Chucks were ripping up the basketball court, or you could be a millennial who went through an unfortunate emo phase in the early 2000s. Converse All-Stars are timeless, though how you wear them in 2016 is more subtle than your eyeliner and skinny jeans look from 2005.

A brief history of Chucks

Before there were Jordans, there were Chuck Taylors. Converse All-Stars are the original basketball shoe, designed almost one hundred years ago in 1917 (and improved a few years later by star player Charles “Chuck” Taylor, who then gave his name to the shoe). Basketball shoes over the last few decades have become so advanced that it is hard to believe that these canvas shoes were actually used on the court. With a flat rubber sole, they are really not ideal for running.

Despite performance shoes coming a long way since the introduction of the original All-Stars, the shoe has remained popular for streetwear. With a steady celebrity following and an affordable price tag, Converse have managed to become a style staple.

A pair of Converse is the perfect way to complete a casual outfit. They are low-key, but they are not daggy like your off-brand trainers from the discount department store. Your outfit should be somewhere between jeans and a plain tee shirt at the most casual, and jeans and a collared shirt at the least casual. This is a brief spectrum, but it covers most men’s usual outfits, making a pair of Converse an essential footwear investment.

The only pants you should be wearing Converse with in 2016 are jeans (chinos are acceptable in some cases). You can also get away with wearing low-tops with shorts.

An ideal outfit to wear with Chucks would be a patterned tee shirt and slim fitted dark jeans.

What color Converse should you get?

There are few designs of Converse All-Stars. Unlike Jordans, which evolve every year, the Cons you buy today are more or less identical to those from decades ago. They bring in variety by released All-Stars in a vast range of colors and even patterns.

You cannot go wrong with the classic color combination of black canvas with white rubber detail and white laces. For something with a little more personality that is still versatile, you could go for a pair that is fully black (including the rubber detailing and laces). Avoid any out-there colors or designs; they are shockingly unfashionable at the moment. If you want something that is so very 2016, consider getting converse in the shade “natural white”, which leans more towards beige than a blinding bright white.

Converse are available in two styles; high-tops, which cover the ankle, and low-tops, which leave the ankle exposed and have a profile more similar to regular sneakers. Low-tops are the more versatile choice, as they go with any style of pants cuff. High-tops can be problematic if your pants have too much excess fabric around the ankles. Both styles remain timeless footwear options.

What to wear with Chuck Taylors