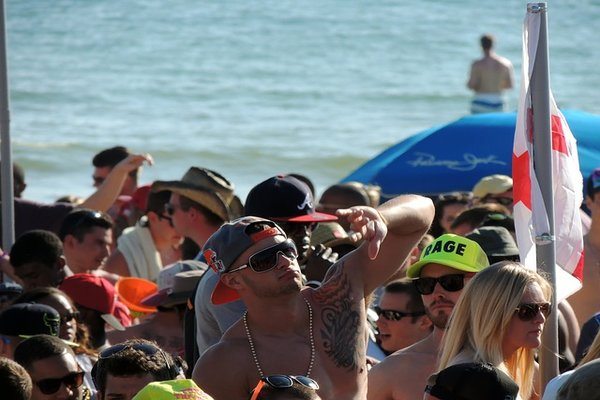 Spring Break is here. Over the next few weeks millions of college students will be off to Florida, the Carolinas and other southern climes to enjoy the warmth, women, and booze of those locales. If you have not yet made plans for the break, then you should consider alternatives to your usual Spring Break destinations.

Indeed, your procrastination may owe to the anticipated boredom of doing the same thing you did last year and the year before that. Your Spring Break routine is unlikely to include many surprises: your afternoons will be filled with drinking beer and lying on the beach, your evenings spent drinking more beer and attempting to get laid, and your mornings taken up with nursing a hangover and trying to remember the name of the little piece lying naked beside you.

To be sure, this is not a bad way to spend a week. But why not try something different this year? Why not see if you can get the pleasures mentioned above in a completely different environment?

I did this once on a Spring Break and was pleasantly surprised. Cruise ship vacations tend to be associated with middle age, middle class married couples. It was who I expected to find when I booked my cruise journey to the Bahamas. Who I actually found was quite different. It had never occurred to me that cruise ship vacations are a favorite among single women, but they were: in twos, threes, and fours—all unattached and looking for adventure.

The five days I spent on that ship were some of the best of my life. Right from the beginning I was approached and chatted up. As a single man, I was an object of curiosity and constant attention at the pool. At dinner, I was always seated with other singles—all women. And at evening shows, I was always welcomed at the table of one or another group of single girls. After a couple of days of arbitrary flirting, I eventually hooked up with a girl who remained my sweetheart for the duration of the cruise. The experience was great fun, and I highly recommend it as a Spring Break alternative.

It is not as expensive as it once was to hop a plane to Europe and to get rather inexpensive accommodation while you’re there. Package deals are offered all the time on online sites, so you should start exploring now. The three cities in particular you should consider are Amsterdam, Glasgow, and Berlin.

There is much more to Amsterdam than hash bars and the red light district—although the latter is a spectacle that is not to be missed. Amsterdam is one of the best places in Europe to just chill. You will never be bored venturing into the city’s vibrant and exciting nightlife. And the days are best spent crawling through the city’s many restaurants, cafes, and museums.  Most of the lounges contain large, comfortable sofas on which you can lay back, drink, and even smoke if you like. Dutch food is not that good, but you will find plenty of places that offer international cuisine.

When people think of Britain, London is the city that comes to mind. But the Scottish city of Glasgow is a much better Spring Break destination. It is much cheaper than London, and it is much easier to see and enjoy all that it has to offer in a week. Over the last decade, Glasgow has become a major center of university life in Britain. The student culture that has sprung up has renewed the energy and spirit of this old industrial city. You will enjoy brilliant and versatile clubbing and pubbing along Sauchiehall Street and wonderful restaurants in Buchanan Street and Merchant City. At least one dinner in the famous Rogano is a must. Glasgow is also well-known for having a great music scene. So be sure to check out various “What’s On” sites and book tickets in advance.

Berlin is another great city for a Spring Break adventure. The most inexpensive accommodation is to be found in the eastern part of the city. Indeed, that is where you will also find some of the most historically important museums and monuments. The city’s public transportation system is excellent, so you will have no trouble getting to the west side of Berlin—if you desire. When I went there I not only roomed in the east side, I rarely ventured outside of it; for that is where I found the hippest clubs, bars, and restaurants.

3. A trip to Australia

Planning a trip to Australia is probably a stretch at this point, but you might be in a position to consider it. Melbourne and Sydney are always good if you are looking to enjoy a bit of big city life down under. If you want to go to the beach, you must make Queensland your destination. Brisbane is not far from the beach—and Australian beaches are some of the cleanest and most beautiful in the world—and the city itself is filled with plenty to do. You will find that your American accent will give you an advantage with the ladies.