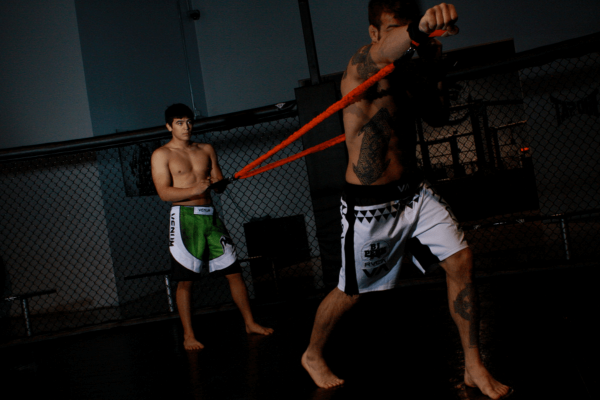 Of all the sports popular enough to get broadcasted on television, the UFC is up there as one of the most violent, physically demanding competitions around. Competitors bodies must be in peak condition, not to mention their minds. If they slip in any aspect of readiness, they become susceptible to brutal injuries.

It is clear that to succeed in the UFC, you need to have a well-rounded workout routine that acts to protect you from injuries while making it possible for you to dish out injuries of your own. While each UFC fighter likely have their own personal regime of workouts and diets that they use, today we get to share Chris Weidmans:

Train for Volume — and Hard

As with training for any activity, “the best way for getting in shape for any of this stuff is actually doing it,” Weidman says. And when you’re a mixed martial artist, there’s a lot to do. In order to train both stand-up and ground fighting styles, he typically works out twice a day, alternating disciplines: kickboxing in the morning, for example, and then practicing Jiu-Jitsu in the evening. No matter the style, he keeps the intensity high. “The actual sparring that we do is as real as the fight — as real as you can get,” says Weidman.

To give his body “a break,” he’ll switch to speed work and circuit training. Hill sprints and explosive movements (think box jumps) are favorites, and strength training includes mostly bodyweight exercises like pull-ups, push-ups, pistols (one-legged squats), and sit-ups. He does some traditional weightlifting, but keeps the weight moderate and uses a higher rep (more than 10 per set) scheme. This approach keeps the focus on strength and endurance over getting swole.

Like anything, to train yourself to perform an activity often means you should practice in similar conditions. Of course, not everyone has access to a coach that can teach them Jiu-Jitsu, but don’t fret, there’s plenty of other tips you can use over on Mens Journal.