Conversation Killers That Can Talk You Out Of The Bedroom 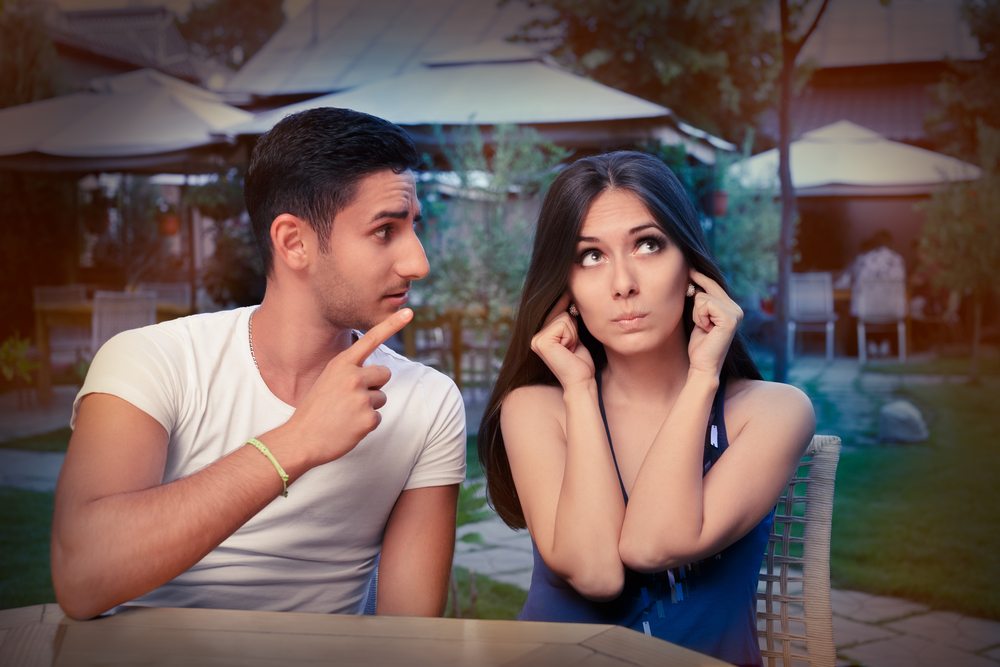 Gentlemen, here is the truth: we are often idiots.

You see, when a woman goes on a date, she wants to talk. Makes sense, right? Of course, you probably have one thing on your mind, and the hope that the night will end in bed. In a perfect world, there would be no conversation, but that is not the case. A woman needs to feel comfortable after all.

But, men make the mistake of opening their mouths and not censoring what comes out. We get this idea that we should share certain things that will make her feel more comfortable, or get her to see you as something more than a date or fuck partner.

The issue is that we don’t think it through. There are topics that can ruin your chances of seeing anything, like her panties. You may be on a date that is romantically focused, which means some topics are not taboo. However, if you are hoping to hit that home run tonight, keep a lid on shit.

Stop Talking About Your Previous Conquests

Did you know women say things to make men feel better about themselves? If you didn’t, you should. This piece of information is important when it comes to this topic to avoid.

Look, you may have some sexual encounters that were historic. You banged the hell out of a woman, gave her a great night and she gushed about how amazing you were. Awesome for you! Now keep that shit to yourself.

When a man subtly or overtly tries to convince a woman to sleep with him because he is a world-rocker, it can kill the night. As I said before, women tell men things to make them feel better. Passing along what another woman has told you about your sexual prowess is not convincing. She expects it was just some ego boosting shit told to you by some skank you banged.

If you notice, there are a lot of negatives going on in her head about your bragging. Real men with true bedroom skills don’t brag; they do. Keep that info under wraps. If you really are great in bed, you stand a better chance of proving it, if kept quiet. Besides, it is more fun to surprise her, than build expectations you may not live up to.

Oh, as a side note, she doesn’t need to hear about your dick size either. Doesn’t matter if you have 8” or a foot, she has heard it all before. You may be able to prove it, but, wouldn’t it be more fun to see that look on her face when she lays eyes on it. I can tell you this, there is not much more beautiful than the face she makes when she does.

She Doesn’t Want to Talk About Your Previous Relationships

Men often think they need to show a vulnerable side to get a woman in bed. This leads them to think it is a good idea to discuss old relationships. The hope is to feed her emotional, romantic side, thus wooing her into bed.

STOP! You don’t want to go down that road. Look, what happens if any of the relationships you talk about ended badly? What if you were the dickhead that caused the breakup? You think she is going to stick to just the parts of it you talk about?

Hell no! She is going to start asking too many questions. You have her curiosity up now. Why did it end? What did you do? And if you point to any negatives about the previous woman, then shit really goes south. Now she wonders if you are comparing, judging and expecting.

Best bet is to forget you were ever involved with another woman. The right time for those conversations will come, if you make it past this date.

Do Not Talk About Sad or Controversial Topics

You need to keep a light mood, that is fun and conversational. This keeps you in control and allows you to work your magic. Why the hell would you bring up your sick or dying grandmother? Don’t kid yourself; men do this shit too. Again, trying to show a vulnerable, family persona that will tug on her heart strings.

The same thing happens with a variety of topics that are controversial. Examples like feminism, racism, politics, human rights and a variety of others. If you pick the wrong topic, or feed into one she touches on, it’s game over. Mainly, this could easily wind up in a battle of words, anger, etc. And yes, I know, men just want to seem smart. But, she isn’t fucking your brain.

Just ignore those kinds of topics and stick to things that make her smile. Stick to topics that are going to potentially get her motor racing. Taking a side on the latest orange-hair in office, is not the path to pillow talk.

Look, I know you aren’t an idiot. Please don’t be offended by my opening, but if you don’t watch what you say, you will come off as one. You need to control the conversation. Steer her away from topics that could alter the mood. Keep her smiling and work on getting her to say yes to everything. Don’t give her reasons to say no, or worse, good-night.

Conversation Killers That Can Talk You Out Of The Bedroom