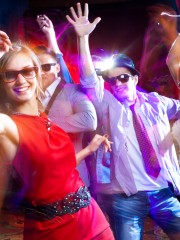 I know many readers of this site are in college, saw the title of this article, and exclaimed, “I don’t need a guide, I’m never leaving college. NEVER!” Listen up Peter Pan, I want to begin by crushing your dreams of being that husky, balding 27-year-old creep hanging around the frat house claiming to be a magician who makes passed out chicks disappear. That guy already exists and is unhappily doing time in a Nashville slammer.

Thus, ultimately you’re all going to join the real world (what I like to call Never Never-Get-A-Job Land) and eventually you will make the trek back to your former college, expecting to be greeted with an alliterative fanfare of booze and bobbies. So here are some “RE – ”s to re-mind you how to act.

Response – Prepare yourself for a chorus of “Didn’t you graduate?” People will not make the intuitive leap that you’re visiting because your real world life consists of sharing a room with your little brother, getting bossed around by white Carl Winslow and sipping Rolling Rocks with 35-year old coworkers who think they’re cool by calling you “dawg” and bragging about the Timberlake song on their faggy iPod nano. Therefore, have a witty response when asked if you graduated. I’m not going to tell you what to say, but I will tell you a punch in the face really gets a point across. Oh, and answering with a phrase like “Graduating in five years is like leaving a party at 10 o’clock, dude” will have you leaving the party at 10 o’clock. With a punch. In the face.

Reunion – This will follow right after people ask if you graduated. Reuniting with some people is cool, for example, I enjoyed sucking face with my former college love: Elle McFunnelson. But beware of the exclamations, hugs and awkwardly inappropriate butt slaps from every other asshat you drunkenly bump into.

Readjust – This was particularly hard for me. Since leaving college, my last big social bender was a summer office party. What’s an office party like, you ask? Picture your grandfather with a raging boner: it’s awkward! Imagine a family reunion where your drunk and crusty aunts hit on you and invite you to “explore the experienced side of the company.” Therefore, when released back into the wild, you’ll probably be in berserker mode. Planning ahead, I’d recommend slapping a Hannibal Lector mask on your face. I found after slamming my second beer, that voice from NBA Jam started egging me on, proclaiming, “He’s heating up.” By my third, I was streaking around campus with a trail of fire in my wake.

Rebel Rebel – How could they know? Hot tramp, I love you so!

Relegated – As a graduate, you’re somewhat of an exile, and coming back to your former college makes you a pariah, lower in the collegiate caste system than fifth year seniors and cafeteria food. Sorry Mario, but your awesomeness is in another castle. But…

Rejoice! Rebirth – Your dismal state is nothing to be ashamed of…Play it up! I found by making up ludicrous lies about myself I won all kinds of pity points. I told people I was a senior in high school, a foreign exchange student from France, a Republican. For once, I found myself not emphasizing with the late twentieth century philosopher Skeelo that I would wish to be a little bit taller and possess the skills of a baller. Sadly, I established a greater celebrity being a Make-A-Wish typhoid patient than I ever did as former student.