Idiots I Went To College With: Fat Mark

‘The Boys Are Back In Town’ is a song I associate with, not one of my own memories, but with this fat fuck I went to college with named Mark.

I met Mark in my freshmen year because he lived in my wing. For the most part, all the guys in the wing were freshmen, but Mark lived with the RA so he was like two years older than everyone. At first, he seemed cool. Since I had to be up a week early for cross-country practice, he was one of the first people I met.

My first impression of Mark was ‘Man, this guy is HUGE.’ That impression never changed. But, at first, Mark also seemed like one of those ‘cool college guys.’ You know, the type that would be the ‘crazy fatso’ at parties, pulling absurd moves and not afraid of completely embarrassing himself.

Man was I wrong.

As it turned out, Mark had this romanticized image of himself as some kind of huge hunk, who was not fat but ‘built.’ He was always asking people to squeeze his biceps and flexing in front of mirrors. One night, my overweight roommate found Mark watching the movie Heavyweights, and commented, “Hey Mark, this is a movie for fat kids like us, eh?”

Mark’s face turned beat red and he angrily responded, “I’m not fat. You might be, but I’m not. I ain’t fat.”

I felt like screaming into his double-chinned face, “Yeah Mark, you’re not fat…you’re FUCKIN’ HUGE.” But I didn’t.

So anyway, the song ‘The Boys Are Back In Town’ factors into this story in four paragraphs. Well, since Mark was a little older than we were, and thought we idolized him, he was always telling these ridiculous stories about his fat life. Then, one day, shit hit the proverbial fan. The freshmen guys were all in someone’s room, watching TV, when Mark came barging in, turned off the TV and exclaimed, “Guys! Big announcement!”

Someone (sarcastically) asked, “Oh do tell.”

Mark, nodding with a big grin on his face, began, “The Wicked Dudes are comin’ to town!”

“The Wicked Dudes? What the fuck is that Mark?” 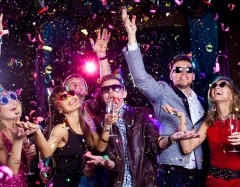 “Oh man! I gotta tell you shrimps about The Dudes! The Wicked Dudes! Okay…so me and my friends from home…we call ourselves The Wicked Dudes. We get together, and go on road trips! It’s always awesome. We hit bars in all different cities huntin’ for sweet tail. It’s great, we score A LOT. And get this one…”

Mark looked around, making sure we were all playing attention and continued, “…when all of us are home from college, we all go to this bar called Fallons and play ‘The Boys Are Back In Town’ like 5 times in a row! On the jukebox! Man…we’re awesome…”

At this point, Mark expected us all to be in awe and begin a Q&A session pertaining to the inherent awesomeness of The Wicked Dudes. Instead, much to Mark’s chubby chagrin, we all started cracking up. For the rest of the year, we all patronized Mark with inquiries into the way of The Dude(s).

My part in this was to ask Mark twice a day how I could apply for a Dude membership. I was determined to infiltrate the Wicked Dudes as a mock member. I constantly felt obligated to ask, “So Mark, what is the mission statement of the Dude order, and how do my credentials fit into the collective Dude vision.”

He would always flip out, shake his head, and exclaim, “Sorry, you can’t be in the Dudes.”

My fat roommate probably annoyed him the most, as every time he passed him in the hall, he’d scream, “Hey Mark!” Then drop down on his knees, throw up a ‘W’ with his fingers, and simply bellow, “Wickedddddddddddddddddddd.”

God, I still hate Mark and The Dudes.

Idiots I Went To College With: Fat Mark