What to Say After the Opener (simple technique)

Welcome to my weekly advice column, where I take questions about all aspects of Game from skillset to inner psychology. Our first question comes in from Hawkeye, who wrote:

Re: walking targets going to work.

When there is no “comfort spot” nearby (e.g. bench, or wall to lean on), and you are forced to walk with the target, I want to ask if you have any good, short default routines after the opener that avoid interview type questions and lead to solid number closes (of course 1-2 interview questions can sometimes lead to a useful commonality, but I am looking for something better or in case her answers suck).

The opener is not the problem for me, I can always come up with something.  However, the next step is the killer. I am assuming the woman has nothing interesting to talk about, not holding an interesting object, not wearing unusual clothes. She is moving fast and there isn’t much time, maybe a minute, before she has to go her separate way to work. 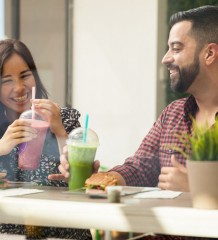 I don’t like to deal in routines, as much as skills. The skills you’re asking about involve keeping a conversation going and making an impact. Overall, what you’re trying to do with a moving set is make an impact, meaning get her attention enough that she will really pay attention to what you’re saying. Suck her into the moment and the conversation. Two skills I like to use here, are cold reading and baiting.

Cold reading is the ancient mystical art of telling people things about themselves that are true about everybody. There are different levels of cold reads you can use depending on the situation. They may be very deep and personal, such as telling the girl that she is lonely or had something happen to her to make her grow up too fast. Cold reads can also be very funny, like telling the girl you can tell her boyfriends in high school got a bad deal.

What I like to do with cold reads on moving sets, is use them to hook her curiosity and get some information about her. So for example I might start a conversation with a girl as she’s walking by, with an opener like this one:

“Hey, I know this is really random but I noticed you and I thought you were really cute, so I wanted to come meet you, I’m Jon.”

Then before there was an awkward silence, but after the girl had responded to my opener I would say something like:

“You totally have a New York vibe. You’re definitely not from LA. I can tell by the…”

…and I would intentionally trail off so that the girl responds. If she didn’t respond after a 2-3 second pause I would say something about the way she walked or looked around or made eye contact, etc. But most girls will just jump into the conversation if you say you can tell by and then stop talking. In fact this is a non verbal way of baiting a girl. Now what’s going to happen here is one of a few things:

– She’s going to say she’s from New York, or the West coast if you’re in NY. And she’s going to want to know how you could tell!

– She’s going to say she’s from wherever you live or somewhere you didn’t guess but she will still give you a new topic of conversation by offering where she’s from, as well as probably be curious as to why you thought she was from New York.

Now I want to talk a little bit about baiting. Baiting is all about getting the girl to either give you information she might be reluctant to, or to get her to ask you, things about yourself. There are a few different kinds of baits, but for now we’ll focus on two, that we can apply immediately to our situation. 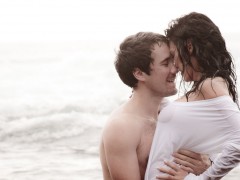 Negations. These are used to get girls more invested in the conversation. Saying something like “I can’t even tell you what I just thought” or “I shouldn’t even tell you this.” Open loops. These are unfinished questions that elicit a response. Things like “I’m totally in the wrong business because I hate to fly” or “You totally remind me of my friend Cara.”

So what you would want to do after you use the cold read, is try to bait the girl into asking you a question or asking you to tell her something you just thought. This will start to build some compliance momentum as well as make sure that she is completely associated and in the moment. Let’s take a look at our interaction again with bait and cold reading applied.

S: “Hey I know this is REALLY random, but I noticed you and I wanted to come meet you. I’m Jon.”

S: “You know I’m not even sure I should tell you say this,” (Bait)  “but, you’re definitely not originally from LA. You have a total NY vibe.” (Cold Read) “I can tell by your…”

S: “I could just tell from the way you walk and, you know I travel a lot for what I do” (Bait) which I hate and I could just tell you’re not an LA girl. Plus you don’t have the typical LA girl uniform on.” (Bait)

From there I would try to move the conversation forward. That may mean breaking rapport to build attraction, it may mean qualifying, it may mean building comfort, but at this point you are in a real conversation with the girl and should make it a point to slow down to a stop so that she is committed to the interaction.

Hope that helps Hawkeye and other guys out there,

P.S.  If you want to learn exactly how to pick up women during the day at places like parks, malls, banks, or grocery stores check out Get Day Game.  It is by far the most comprehensive course on day game available. Get it here.

About john sinn Sinn is widely regarded as the second best PUA in the world. Sinn is known for his hard nosed style and take no excuses approach to teaching. He is a nondenominational teacher, which means that he subscribes to no particular method and instead blends the best of every school of seduction to create the best possible results for himself and his students. Sinn is currently running his own pick up company The Sinns Of Attraction, which offers live, phone and email training.

What to Say After the Opener (simple technique)