Back in my day, the only good book we had to learn about flirtatious banter was David D’s Double Your Dating. A classic in its own rite, DYD put forth the cocky and funny (CnF) paradigm that became the blessing and curse of the last decade. For the three people reading who are unfamiliar with CnF, David D advocates making offhanded cocky remarks that a woman can’t help but find hilarious. Often the humorous subtext of CnF is that the guy is “cooler” than the girl, and, as such, he should “tease” her. In other words, CnF means treating a woman you want to sleep with as if she were your “bratty little sister.”

And that’s my problem with CnF: I don’t want to sleep with my bratty little sister. 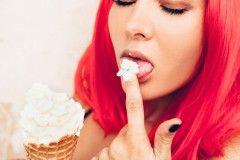 Thus, teasing in such a contrived manner always felt alien to me. I mean, I understand the funny half. I even understand the cocky half. But the two together just never seemed to jive. I never understood why guys thought antagonizing girls they were obviously attracted to was helpful. And if I don’t understand it, you can bet the girls don’t understand, either.

Personally, I find flirting by making comments that bring me closer to the girl is more natural, plus it makes more sense to her. Let’s face it: she knows why you’re talking to her, dudes. It’s not some big shocker that you’re attracted to her. I don’t care what your pickup books and DVDs told you, you’re not flying stealth or going under the radar. The only guys who can do that are gay guys…because they’re gay.

Regardless, here’s a snippet from a text message I convo I (literally) just had where I used CnF to express my interest.

Rob: no, because it’s not like we’re going to seriously date

Rob: I know you playerette

Babe: i want to settle down

Babe: and why would u not seriosuly date me? I could take offense to that sweety!!!

Rob: because we’d be too perfect for each other

Rob: we’d ruin each other for every other person we’d ever date

Babe: dude really? what makes you think we would break up?

Rob: ha you’ll find out when you have the children

Babe: you know hun the guy doesnt get to choose

Babe: u r NOT calling my child vanilla ice!