What A Woman’s Body Language Is Telling You 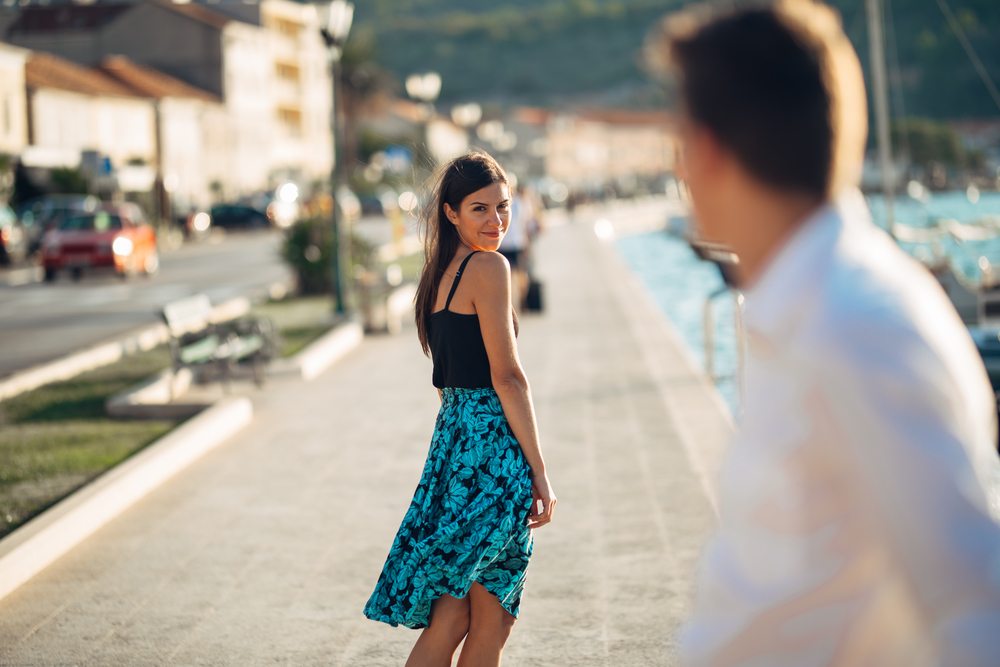 Women are talking to you all the time, just without words. Men are always looking for insider information about a woman’s interest. However, most men don’t understand body language enough to read the signals she is giving. There are multiple ways a woman can express interest and intent; some are intentional, while others are instinctual.

I have previously discussed micro expressions, subtle uncontrolled tics or actions that indicate lying, interest, disinterest and more. However, body language is more overt, often involving various parts of her body. Body language has been known about for centuries, yet men are rarely taught much about it. But, if you are going to be a true hunter, you want to know as much as possible about your prey. The beauty of body language is that it can often tell you if you should even approach a woman.

With women, eye contact should often be the first step in your approach. Once eye contact is made, how a woman responds bodily can often give you all the information you need. Most will tell you immediately if you should approach or not, and this minimizes rejections. I hate rejection, so knowing as much as possible right away is high-priority.

First, let’s look at some of the obvious things women will do that let you know she is interested. Surprisingly enough, some men can miss very, obvious signals, often because they are overlooking the details.

Playing with her hair – this is the time-tested action that many men know. When you make eye contact or if you are just observing her, watch for this indicator. If she is looking at you while doing so, she is showing attraction. If you observe her doing so, it usually means she is “in the mood” as it were.

Genuinely smiling at you – a smile can go one of two ways on initial contact. Sometimes the smile will just be “courteous,” usually not showing teeth and looking forced or tight. When attracted, the smile is a full-facial smile; the mouth usually opens, cheeks raise and the eyes “light” up.

Raised eyebrows and sultry eyes – often when a woman sees an attractive man, here eyebrows will raise, while at the same time her eyelids lower a bit. This is a mix of conscious and unconscious signaling but tells you she likes what she sees.

Lip biting – another obvious signal is if a woman “bites” her lower lip. If you make eye contact and you see her drawing her lower lip into her teeth, she is attracted. This is another that may be conscious or unconscious.

The thing to remember is that humans are animals. Many of the body language signals you can pick up on are directly related to mating instinct. In the animal world, females often watch males preen and show off for her attention, then give their own signals when he is successful. Humans are much the same way.

Facial signals – watching a woman’s face closely can clue you in to how interested she is. Do her eyelids “flutter”? An increase in blinking is a sign of attraction. Pupils and nostrils are unconscious indicators. During arousal/attraction pupils dilate and nostrils flare. Watch for licking the lips as well, as her mouth will get drier during excitement or arousal. Watch for blushing as well, this is a good indication of attraction.

Body signals – when you talk to a woman, look at the position of her body. If she turns to you with her whole body, this is clear attraction. Should she keep her lower body turned away (knees pointing away from you) she isn’t quite there. However, if she is mirroring you, such as picking up her drink when you do or crossing her legs when you do, this is a positive sign.

Women will also touch themselves to calm their excitement. Sometimes it is rubbing her thighs or maybe her arms, but the indication is probably nervous excitement. If she is constantly crossing and uncrossing her legs, this is nervous energy and probably points to excited nervousness.

Erogenous zone signals – one thing women will do unconsciously is expose or touch their erogenous zones. A woman’s neck, lips, and collarbones are the usual erogenous zones. When attracted to a man, she might caress her neck or lightly run her fingers over her lips or collarbones. If she is doing this, it is giving you an indication that these are good places to kiss. Also, women release hormones via the armpit, so movements that open the armpit are instinctual and attract through chemistry.

Other Body Language Signals to Watch For – Good and Bad

There are other things you can watch for, some of which will let you know she is NOT interested.

Good signs – bouncy, nervous energy i.e., foot kicking, shoe dangling, bouncing on toes, talking fast/excitedly, etc. Lots of smiling, giggling and facial expressiveness. Nodding when you speak, specifically a triple nod. Repetitive facial expressions, such as pursing the lips or scrunching the eyes for example. Touching/stroking objects, such as her drink glass. Taking off outer layers like her sweater or top shirt, etc.

Above all else, you must watch her. Most men don’t focus on cluing-in to the signals a woman gives. Most are too focused on the end goal to realize she isn’t down for more. If you are not reading her body language, then you are going to waste a lot of time getting to the rejection that may be coming. Be aware and pay heed to the little things. If you do this, you will spend a lot more time having fun versus chasing it.

Here is another article related to the subject: https://www.tsbmag.com/2018/02/13/what-a-woman-says-and-what-she-really-means/

What A Woman’s Body Language Is Telling You