How to Pick Up A Bartender

Question of the Week? brought to you by our friends:

How to Pickup a Bartender

Funny, this is a question that I’ve been asked quite a bit recently during my one on one coaching calls with various clients of mine.? It seems everybody wants to pick up the bartender or the waitress. 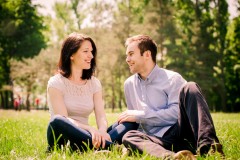 Before I give you some tips for doing it, I also want to acknowledge some of the downsides to going after a bartender. I am not giving you this “downside” as someone who is bitter because he never scored a bartender? I am giving you this advice as someone who worked in a bar for many years, slept with many of the bartenders I worked with, and saw on a daily basis how they responded to an interacted with their male customers.

Why You Want a Bartender

First of all, let’s realize exactly why we’re all so attracted to the bartenders.? There are three main reasons guys tend to ALWAYS fall for the bartender:

Bartending is a high value job (one of the reasons I recommend it as the best part time job for meeting girls) and the bartender commands the attention of everyone in the bar.? For some reason, girls that you otherwise would have only found mildly attractive look ten times hotter behind the bar.

Even more powerful, is that on an unconscious level we know that she will not reject us horribly, and at the very least she will flirt with us a bit, and FEED our EGO.

3.? Your Ego wants what everyone else wants.

Do you think you’re the only guy in the bar with a crush on the bartender? Hell no. In fact, I would wager to say that about 75% of the guys in the place have the same fantasy of scoring the bartender that you do. This sense of competition fuels the desire for her. It’s sort of like bidding on an Ebay auction. Just the mere fact that you know there are hundreds of other people who want the same thing as you makes you want it ten times more.

I am not trying to discourage anyone from going after the bartender, and I’m not saying it is impossible.? It’s not.? I’ve done it.? And I know plenty of guys who have done it also. I’m just saying that it is not necessarily worth the effort it entails.

I just hate to see guys pining over a bartender when there is hundreds of woman more fun, more beautiful, and more obtainable surrounding them in a bar.

The Pitfalls of Going After a Bartender

Before I give you some tips for going after the bartender, I just want to make you aware of exactly what makes them so difficult to score.

The three reasons that make you want a bartender so badly … are the EXACT reasons that make her so difficult to get. She is in a position of power. She is the center of attention. You are merely just another guy in the bar guzzling Coors Light.

You’re probably thinking that you can just create some “social proof” within the bar and build your value up to her level. And you’re RIGHT. You can definitely spark attraction in a bartender by displaying a vast amount of social value.

But here is the problem?.

When you leave the bar, she forgets about you. And her attention goes right back to the guys within her tight knit social scene. I can tell you right now, when I worked side by side with female bartenders, I NEVER feared competition from customers. NEVER. We looked at them as “outsiders” and although we would occasionally date a customer, or hook up with a customer, in the end, we ALWAYS wound up with someone within our social circle.

The second reason that it is so difficult to score a bartender is because she is PAID to be nice to you. This means that she is going to be giving you all the signs that a girl likes you. Yes, you’ll be getting indicators of interest out the ass, but it will be nearly impossible to determine her level of “real” attraction toward you.

If you want to get an honest assessment of where you stand with her, sit back and watch her interact with other guys, and be objective about what you are seeing. You’ll probably notice that she gives all of the guys in the place a similar amount of attention. She smiles at them. She laughs at their jokes. She even gets slightly physical with many of them.

Is she acting that much differently towards you?

The third reason is that “desire” you have to score a bartender, every other guy in the bars has too. This means this woman has heard EVERYTHING you can possibly imagine. In fact, the more original you try to be, the more you are going to appear just like every other poor schmuck in the place who just finishing saying a similar thing (read this article for further explanation).

Unlike a normal “hot” girl who maybe five guys gather the courage to hit on in a night, the bartender’s approachable vibe gives dozens of guys the courage to try to pick her up. This means that she is JADED beyond JADED and stereotypes you as “one of those guys” immediately.

Have I convinced you to move on to greener pastures yet? No? Alright then …

How to Score a Bartender

If you’ve made it this far, I suppose you haven’t heeded my warning to avoid bartenders in the same way you avoid strippers and prostitutes, so let me give you a few tips to increase the odds of success.

1.? Engulf yourself in her scene

This means make friends with the other bartenders, the bouncers, the DJ, the owner, and the shot girls. I give a pretty detailed account of how to do this in Social Superstar. But for now, I would just concentrate on creating value for these people.

This means remember names, make them feel important, connect them to important people in the bar, tip good, recommend hot spots for after hours, introduce the DJ to new music, give the owner tips for increasing sales, give the shot girls tips for selling guys more shots?. BRING THEM VALUE.

Once you have brought them value, you then begin to assimilate her social scene within yours. Make yourself a part of her world.? Know the “inside jokes” and gossip of her scene. Appear to be one of them?

2.? Remove her from her environment

She will always have an unconscious “anchor” of you being just another customer as long as you are both in the bar. But if you’ve establishing yourself as having high value within her scene, and then you remove her from her comfortable environment, you BECOME the guy she knows, the guy she already has rapport with, and the guy she can become attracted to.

The best way to do this is suggest an after hour’s party or place to go. It is particularly powerful if you take her to a place where your value is higher than hers. This will induce a little “role reversal” and allow you to be the one with the power.

As someone who worked with a ton of bartenders, I can tell you that their biggest fear in dating a customer is that things will get weird. As in, the guy starts stalking her, showing up at her job all the time, and making her work environment completely uncomfortable.

Say things that will ease this fear.

You can do this by making fun of “the other guys” who do this. Or you can complain about how a girl did this to you and how much you hated it. This will let her know that you’re not one of those guys that is going to stalk her out at work. And don’t make any comments that would lead her to believe you are the jealous type who has a problem with how she earns her living.

Once she feels comfortable around you, simply build attraction the same way you would with any other hot girls. This means banter, flirt, get physical, and escalate the conversation along towards a kiss.

If all else fails, find a job in a bar. It is by far the easiest way to score a bartender.

I have my theories why this happens? but for now, just know it happens.

How to Pick Up A Bartender