How to Beat a Hangover 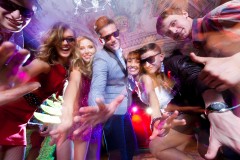 We’ve all been there. We wake up dehydrated, head pounding, puke dried on our chin, covered in the smell of liquor and cigarettes. We have to piss, but the thought of standing up makes us want to cry. Visions of our drunken antics dancing around our mind… we think we’re going to lose it.

The dreaded hangover. I’ve had one or two in my day! I thought this would be a great follow up piece to Derek’s recent article on choosing a classier cocktail.

What causes a hangover?

But the truth is, who cares what causes a hangover. We want to know how to get rid of it as quickly as possible.

The best way to beat a hangover

If drinking yourself into an early death just to avoid a few uncomfortable mornings isn’t your thing… then your best chance of beating a hangover is preparing before you start boozing.

If you know you’re going out for a rough night on the town… you’ll need to take some necessary precautions. You should start by eating fatty foods and drinking milk to line your stomach. This will slow the absorption of booze into your bloodstream, giving your body time to process the toxins in the liquor more effectively.

Tips From a Drunkard

Have some self control and limit yourself to one drink per hour. If you can manage this, your body should be able to process the alcohol and keep you feeling alright.

The darker the drink, the better your chance of waking up with a throbbing head. Yaigermeiser = hangover. Period. Cogeners in drink are what give drinks their different color and taste, but they are also toxins that kick your ass plenty.

Avoid mixing drinks. Long Island Iced Tea is not as innocent as it sounds. The more variations of toxins you consume, the bigger your chance of a hangover.

Try to drink a glass of water in between drinks. If you feel like a girl doing this, sneak into the bathroom 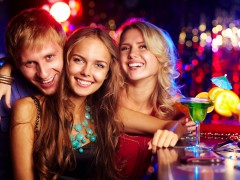 and do it there. I had a friend who would fill a martini glass with water, and look sly drinking it. If you’re drinking, you are sure to be peeing. If you don’t keep replenishing yourself, you’ll be depriving your vital organs of the water they need to function properly.

Bubbly drinks and tonics are scientifically proven to speed up the alcohol absorption into your bloodstream. Plus, you look like a girl drinking them.

Tips for the Morning After

I’m going to assume you’ve ignored everything I told you above. I listen to myself either. That being said, your only hope now is to try a mix of these hangover cures.

Try to sleep it off. Keep your eyes closed as long as possible, and keep praying that the next time you wakeup your headache will be gone.

Drink at least a half gallon of water the first hour upon waking. Use the water to wash down two or three Advils, Alleves, or whatever your pain killer of choice happens to be.

Replenish the lost vitamins in your body. You’ll need to concentrate a A, B, and C. You’ll get your vitamin A from a heaping portion of eggs and a glass of carrot juice. A banana will give you a dose of B. A couple glasses of orange juice will load you up in C. Or you can just take supplements.

Drink coffee and soda wisely. The caffeine in coffee and cola will make you feel better by reducing the swelling of blood vessels in your brain. But you need to be drinking that water along with them. If not, the caffeine will only serve to make matters worse by dehydrating you more.

Grind some Ginger into your OJ. Ginger is a natural herb that battles nausea. It works best to if you major problem is an upset stomach.

Go to the gym. Although its probably the last thing you feel like doing, exercising will help get the oxygen flowing back into your brain. You’ll also begin to sweat a bunch of toxins out of your body.

Eat burnt toast. The carbon formed by burning the toast will work to soak up the other poisonous toxins floating around your body.

Eat bananas with your burnt toast. They contain magnesium, potassium, and sugar, all of which are lost during a night of boozing.

My feeling is that why I do feel noticeably better by taking these pills, I also get the sense that I’m just masking the problem.

I have no scientific research to back this up, but I feel like if I drank the way I did back in college, and was swallowing one of these pills every night to avoid the morning ritual… I’d surely be dead right now.

If you’re in a jam, absolutely need to drink, and absolutely can’t face the wrath of an angry hangover.. give them a shot. But do your own research before taking them too often.

How to Beat a Hangover